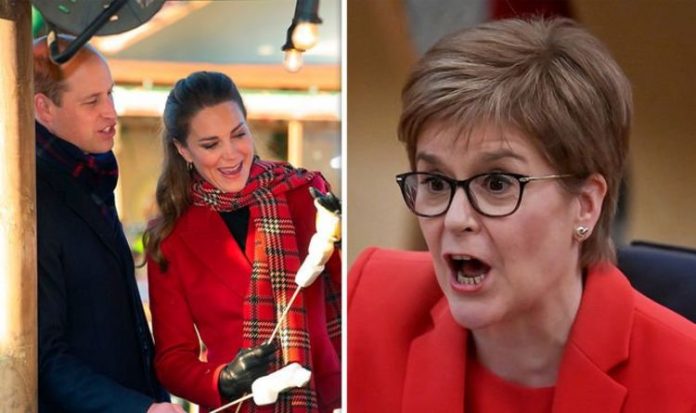 The Duke and Duchess of Cambridge travelled to ten locations in England, Scotland and Wales during their 1250-mile tour in December to thank key workers for their incredible effort during the coronavirus pandemic. However, they had a less than warm welcome from the SNP in Scotland, who warned them twice against travelling north of the border, it has emerged. Emails released under the Freedom of Information Act reveal the concerns of Scottish officials over the royal trip.

On November 12, the First Minister’s principal private secretary John Somers told the royals: “You’ll know that we are currently asking people living in Scotland to avoid unnecessary travel from local authority to local authority and to keep journeys within the area they live to an absolute minimum.

“We review our guidance regularly though as the First Minister regularly says in her daily briefings, it is not possible to offer a definite position ahead of time given the variables and unknowns presented by the pandemic.

“From a personal point of view, I think the [tour] is one which would mean a lot to many people living throughout the country.

“My anxiety though is the practical aspects of it and how presently it may be difficult if travel restrictions are in place.

READ MORE: Nicola Sturgeon accused of political point-scoring over Kate and Will

Nicola Sturgeon was “spikey” in her comment about Kate and William’s tour (Image: GETTY)

Kate and William about to board the Royal Train in December (Image: GETTY)

“I think my view is that at the moment the chances of the tour having to be postponed are potentially quite high.”

“This is obviously likely to have a major impact on the plan you are working on I’m afraid.”

Nevertheless, the Cambridges pushed on with their trip to Scotland just two weeks after this email was sent.

After departing from and travelling overnight, the couple visited the Scottish Ambulance Service in Edinburgh and a school in Berwick, before heading back across the border to England.

She made a “barbed reference” to the royals, emphasising that Scotland was still under strict travel restrictions and hinted that she was not in favour of the visit.

Ms Sturgeon said: “The Scottish Government was advised about the intention to visit, and we made sure that the Royal Household was aware, as you would expect, of the restrictions in place in Scotland so that could inform both the decisions and the planning of the visit.

Kate and William at a school in Berwick (Image: GETTY)

“Any more questions should be directed to the Royal Household.”

While the First Minister stopped short of confirming she had told the royals not to come, her “spikey” words made her feelings on the matter clear.

However, she was branded a “stick in the mud” by a royal expert, who argued that she was simply scoring political points.

Mr Myers pointed out that the trip was said to be arranged with the devolved parliaments, that the royals were carrying out work, and that all necessary precautions were put in place, including social distancing and masks.

He added that Ms Sturgeon “never misses an opportunity to stick the boot in”.

The royal editor said: “It was all planned by the UK Government and devolved parliaments of Scotland and Wales, however, there were some dissenting voices.

“The First Minister of Scotland was, let’s say it was a barbed reference, she was a bit spikey, she didn’t necessarily want to get involved with the flag-waving ‘isn’t this all a great idea’.

“And she just said, ‘We told the Royal Household of our views about the stringent restrictions on movement’ ‒ you can’t even move from your borough in certain places in Scotland.

“In my personal view, I think she was being a bit of a stick in the mud, it was all quite socially distanced ‒ there was a bit of a crowd at Edinburgh station.

“However, I think it was a bit of political point-scoring shall we say ‒ Brexit’s coming up and she never misses an opportunity to stick the boot in and she definitely did on this occasion.”

He added that the Royal Family’s work is arguably “essential”, and that, while he acknowledged there was a debate to be had about that, he did not agree with the First Minister’s stance.

He said: “If the Royal Family aren’t getting out and flag-waving and raising the profile of causes, what are they doing?”