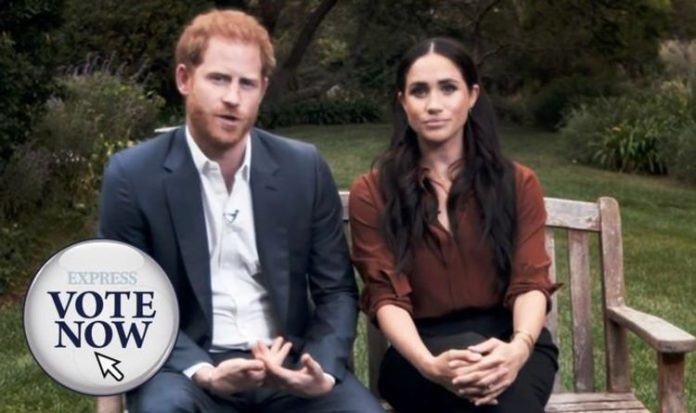 Meghan Markle and Prince Harry spoke in a two-minute video for Time 100 yesterday, where they spoke about the importance of voting in the upcoming US Presidential election. Meghan implored Americans to vote, while Harry discussed the importance of rejecting “hate speech, misinformation and online negativity”.

The Duke and Duchess of Sussex gave the interview as part of the Time 100, the magazine’s annual list of the world’s 100 most influential people.

Speaking on the clip, Meghan said: “Every four years we are told the same thing, that this is the most important election of our lifetime. But this one is.

“When we vote, our values are put into action, and our voices are heard.”

Prince Harry added: “As we approach this November, it’s vital that we reject hate speech, misinformation and online negativity.

“What we consume, what we are exposed to, and what we engage with online, has a real effect on all of us.”

Harry said he was not able to vote in the election because he is not a US citizen and also discussed royal protocol on UK politics.

The Duke said he had never voted in the UK, where convention dictates royals should not involve themselves in politics.

It is considered sacrosanct for members of the Royal Family to remain apolitical and in practice, they never participate in elections, by voting or stating a political allegiance.

JUST IN: Meghan Markle and Prince Harry face backlash for US election stunt

One person wrote: “So here’s their new bandwagon, the US election!

“Patronising us again telling us we need to vote!

“What the heck has this got to do with a Duke and Duchess?”

Another user fumed: “Why’s a UK prince and his wife getting involved in a US election? What business is it of his?

“Didn’t we fight a war to end interference from the British Monarchy?”

A third person wrote: “This is once again Meghan & now Harry directly entering into politics.

“They’re obviously encouraging people to vote in this ‘crucial election’ for Dems as M is outspoken about her friendship with Obama & hatred of Trump. Unacceptable for RF members.”

The Duke and Duchess of Sussex stepped down as senior royals earlier this year in order to forge their own path away from the Royal Family.