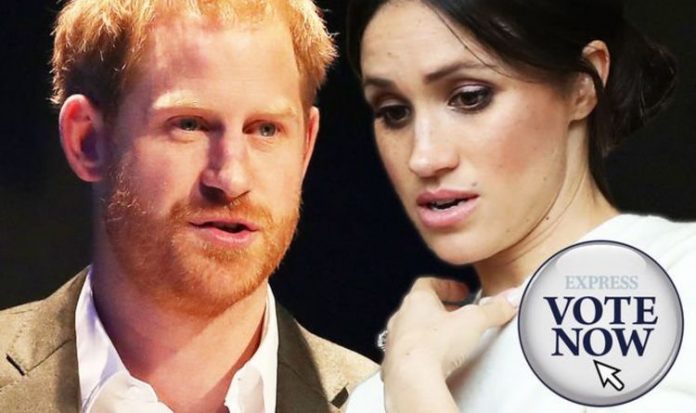 Meghan and Prince Harry have gained growing independence from the Royal Family since they announced their decision to step down as senior royals. In late March, days before they officially stopped being full-time working royals, Meghan and Harry crossed the Canadian border to establish their post-royal life in California with their son Archie Harrison.

In July, the pair bought their first home across the pond in Montecito, Santa Barbara.

The Duke and Duchess of Sussex, according to royal expert Omid Scobie, didn’t take any money from Prince Charles and the Duchy of Cornwall to pay for their new £11.1million mansion.

Rather, they used their own savings and started a mortgage, he said.

Last week, Meghan and Harry announced they had signed a multi-million deal with Netflix, which will see them producing docu-series, TV shows, children’s programming hoping to educate and inspire viewers on a series of topics.

Should Meghan Markle and Harry drop titles if they want to move into showbiz? (Image: GETTY)

Meghan Markle and Prince Harry may appear in documentaries in the future (Image: GETTY)

The pair may appear on screen – but only in documentaries.

Following the blueprint created by Michelle and Barack Obama, who also signed a deal with Netflix after the 44th President of the US left the White House, the Sussexes are likely to take part in interviews for documentaries.

However, experts added, a glittering return in front of the camera of Meghan as an actress is likely to be ruled out.

Speaking about their new venture, Meghan and Harry said in a joint statement: “Our lives, both independent of each other and as a couple, have allowed us to understand the power of the human spirit: of courage, resilience, and the need for connection.

Both Netflix and the Sussexes remain tight-lipped on the details of this deal, but experts have said it could be worth up to £75million.

Professor Johnathan Shalit, the founder of InterTalent Rights Group, told Newsweek: “My guess is they’re probably on a par with the Obamas if not more.

“Certainly not less. The thing is about American presidents, there are quite a few of them around.

“As much as the Obamas are amazing, the world is divided about how successful he was.

“Where as with Harry and Meghan, never before has a grandson of the Queen and son of the future King become available to the commercial market place.

“These people are entirely unique. There is only one of them in the world and there can be only one available.

“They are royal. They are prince and princess. Even if they don’t use that title, that’s what they are.

Meghan and Harry have gained even more freedom from scrutiny yesterday, after they announced they have repaid the £2.4million spent in renovation work for Frogmore Cottage, their first home as a family-of-three.

However, some commentators and royal watchers believe the couple would only be freed from public scrutiny if they dropped their titles.

“Now, if they just give up their very commercially beneficial royal Duke & Duchess titles, they can do & say whatever they like…”