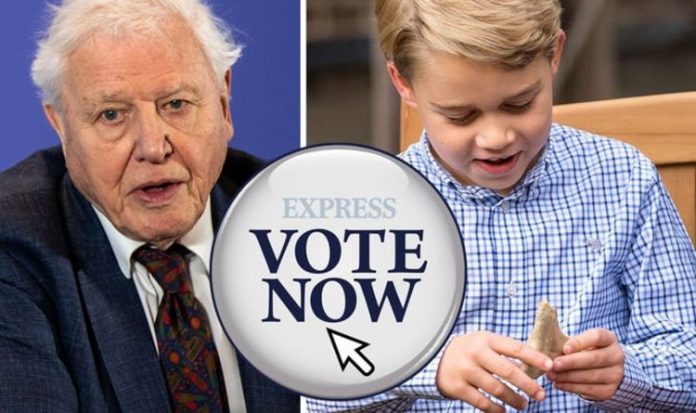 Prince George was given the 23-million-year-old tooth of a megalodon, a giant shark now extinct, by the naturalist who found it in Malta in the 1960s. But this present, announced by Kensington Palace on Sunday, dragged the seven-year-old into the centre of a row after Malta’s Culture Minister José Herrera said he would demand the fossil back.

He told Times of Malta: “There are some artefacts that are important to Maltese natural heritage and which ended up abroad and deserve to be retrieved.”

The culture ministry has since backtracked after Mr Herrera’s remarks sparked a huge backlash among Malta’s citizens and royal fans.

Saying the gift could remain with George, a spokesman for the ministry said: “The minister would like to note that with reference to this case, it is not the intention to pursue this matter any further.”

Speaking about the country’s fossils and artefacts scattered around the world, the spokesman added: “As a nation, we are extremely fond of our history and hence through our national heritage agencies we are always actively looking at avenues to acquire artefacts that have intrinsic value to the Maltese islands.”

This row sparked a lively debate on social media, with the online community divided between those thinking Malta has no right on the fossil and others believing Prince George should return the ancient tooth.

Now Express.co.uk is asking its readers to express their view on this issue.

Among those demanding Malta to be given back the artefact, there was one Twitter user who said: “Malta said, not this time.

“They still waiting on their other stuff probably.

“Not getting away with it anymore. Sad for George but fair demand.

“It belongs on Malta, not in the drawer of a seven years old kid.”

Another named Maria said: “This fossil should be in a Natural History Museum and not in the Prince George toy room”.

Angie added: “Malta wants their shark tooth back and the right thing would be to return it and not hand it over to a 7yo boy.”

Another social media user named Zodiac added: “When this gift was proposed, they should have done their due diligence. Who is advising the Cambridges. PR after PR failure!”

Twitter user Lacey simply expressed his feelings towards Prince George, saying: “The only person I feel sorry for is little George. He’s innocent in the whole thing.”

However, other Twitter users believe Malta has no right to claim the fossil.

“It was found where it had been since the shark died millions of years ago.

“Should everyone who’s ever collected a fossil return it to the country/state where they found it?

“The tooth is NOT the Elgin Marbles, and Sir David had the right to do as he wished.”

Another pointed out there are several online sellers listing what they claim to be megalodon teeth for around $50.

Adding a picture of some of these specimen on sales, Maja wrote: “Well Malta, you can start from these sellers.”

Kim added: “Attenborough has had it for 60 years?! Gave it to a member of the Royal Family.

“And they want it back? Seems ridiculous.”

“Corruption has cost us billions of euros.

“I ask my government to prioritise and please get a grip on what’s important.”

Similarly, Malta’s MEP Roberta Metsola, wrote: “This is not satire. We have lost the plot.

“Rather than fight to get back the millions it allowed to be stolen in corruption, this Malta Government’s priority is now to engage in a battle with a little boy for a shark’s tooth given to him by the world’s leading natural historian”.