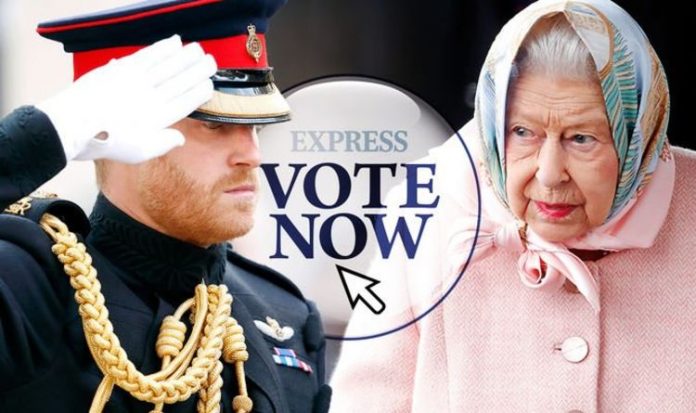 Prince Harry had to step down from a number of military appointments, including Captain-General of the Royal Marines, when he officially quit as a senior member of the Royal Family last year. The loss of his military titles was reportedly “devastating” for the Duke and the royal has been holding out hope the roles would be reinstated after his 12-month Megxit review. But Palace insiders have said the Queen is unlikely to honour his request.

A Palace source told the Telegraph the Queen’s attitude has not changed since the Sandringham summit when she made clear her grandson could not have a “one foot in, one foot out” approach to royal duties.

If the monarch does decide to formally strip Harry of his forces appointments it is likely to come as a huge blow to him.

A friend told the newspaper: “His military work is one of the most important things to him.

“Of course he wants to keep them.”

Last January Meghan and Harry made the bombshell news they would be quitting the Firm, publishing a statement to their Instagram account SussexRoyal.

The Queen is said to have been blindsided by Meghan and Harry’s surprise statement.

Before stepping down as a senior royal, the Duke of Sussex held the titles Captain-General of the Royal Marines, Honorary Air Force Commandant of the Royal Air Force Base Honington, and Honorary Commodore-in-Chief of the Royal Naval Commands’ Small Ships and Diving.

The loss of Harry’s military titles was agreed during the Sandringham summit at the beginning of last year, where the Duke discussed the terms of his split from the Royal Family with the Queen, Prince Charles and Prince William.

JUST IN: Tell us what you really think! Piers Morgan lashes out at ‘angry’

The Duke told him: “I’m devastated that I am having to step down.

“I feel I’m letting people down, but I had no choice.”

The Queen has yet to name who will fill the positions left vacant by the Duke of Sussex’s departure.

Princess Anne and Prince William are set to be in the running for the coveted role of Captain-General of the Royal Marines.

Reports have suggested Harry could return to the UK for Trooping the Colour in June.

If he does it would be the first public reunion with the Royal Family since Megxit.

Meghan is not expected to make the trip across the pond.