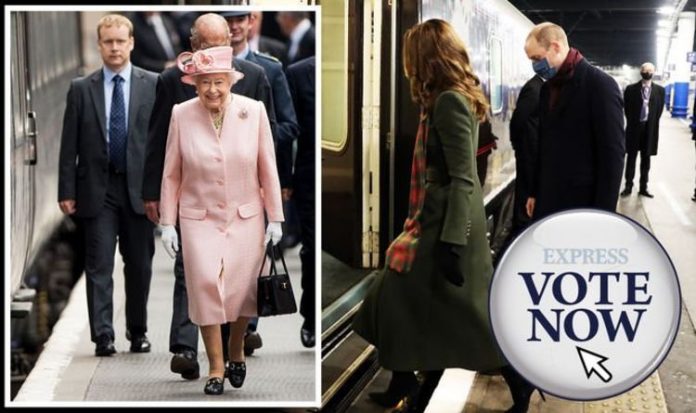 The Duke and Duchess of Cambridge boarded the service on Sunday to travel 1,250 miles over a three-day tour of the UK to thank communities, outstanding individuals and key workers for their efforts during the coronavirus pandemic. It is thought the tour will be the duchess’s first official journey by the royal train despite having been a member of the monarchy for almost a decade, while the duke has used it a number of times.

But the train has long been criticised for its cost – met by the British taxpayer.

Only three trips – two by Prince Charles and one by the Queen – were taken on the Royal Train between the 2019 and 2020 financial year, but the total cost was more than £63,000.

Its service contract is also an additional £300,000 a year and it is maintained by the German firm DB Cargo UK.

A standard anytime rail ticket for the same journey at the time cost just £1.30 per mile.

The present Royal Train came into service in 1977 to mark the Queen’s Silver Jubilee, but the royal family have had their own dedicated train since Queen Victoria’s reign.

Described as “Buckingham Palace on wheels”, the train was launched in 1842 because Queen Victoria is said to have disliked travelling by coach.

Queen Victoria was the first monarch to travel by train, leaving at midday on June 13 1842 from Slough and travelling to London’s Paddington Station.

Since the Victorian era, the Royal Family have travelled in style, using their own train for holidays across the country.

The train is preferred by the Queen and other senior royals because it is a home-away-from-home, complete with an office, sleeping quarters and dining areas.

Even royals are only permitted to use the train on invitation from the monarch.

William has travelled on the service a number of times, notably on the day of his mother Diana, Princess of Wales’ funeral in 1997, when he joined his father, brother and the Spencer family on the journey to the princess’s ancestral home Althorp for her burial.

In 2003, he journeyed overnight on the train to Bangor with the Prince of Wales to carry out a day of engagements in North Wales ahead of his 21st birthday.

It is not known if the Cambridges will travel with their entourage of private secretaries, press team and other members of their household.

Kensington Palace said the three-day tour, which ends on Tuesday, will make stops in England, Scotland and Wales in line with Government coronavirus guidance.

During the official visits, the duke and duchess will pass on the nation’s gratitude to the groups they meet for their efforts keeping people safe, or the country going.

The nine burgundy carriages date back to the Queen’s Silver Jubilee in 1977. The carriages replaced others than first came into service in 1941.

The luxurious carriages boast a 12-seater dining room, comfortable bedrooms with en-suite bathrooms to a smoking room decked out with ornate gold fittings.

The train also has space for the Queen’s staff and there are bedrooms with bunk beds.

Stunning pictures show Queen Victoria’s Saloon where the monarch would have relaxed on her first royal journey from Windsor to London in 1842.

The saloon is the epitome of extravagance with a lavish blue and gold theme, which although refurbished, remains pretty much the same today.

Meanwhile, the Queen’s former living room is austere compared to the luxury enjoyed by her predecessor complete with simple designs and furnishings and paintings of Scottish landscapes by Roy Penny.

Her saloon is a 75-ft long carriage divided into a formal entrance hall, sitting room, bedroom and bathroom, and a bath used by the Queen many times.

The train operator makes sure the train does not go over any bumps at around 7.30am so the Queen’s bath water does not splash out.

The area also has bathroom facilities for the Queen’s dresser and a 3ft-wide single bed and a second lobby.

The personal area is decorated in pastel shades with a pale blue sofa.

There is also a sitting room with a sofa small dining table and a desk for the Queen to carry out work on official papers.

Prince Philip also has his own carriage, with the only difference being that he has a kitchen.

The Duke of Edinburgh has a saloon carriage of a similar design but with a kitchen, green curtains, matching chair cushions and a brown carpet.

Scottish landscapes and Victorian prints of earlier rail journeys hang in both saloons.

Both Prince Charles and his wife Camilla have separate carriages, in the centre of the train, which has en-suite bathrooms.

Heir to the throne Charles has his own lounge car with a bedroom, bathroom and study with a small writing desk and a blue and white floral patterned sofa which matches the curtain fabric.

The other carriages include dining cars, a general purpose saloon for senior staff with sleeping quarters, a sleeping car for junior staff with bunk beds and a carriage for escort staff and maintenance workers.

There is also a royal dining coach on board including a long middle table, which can be extended to accommodate up to 12 guests.