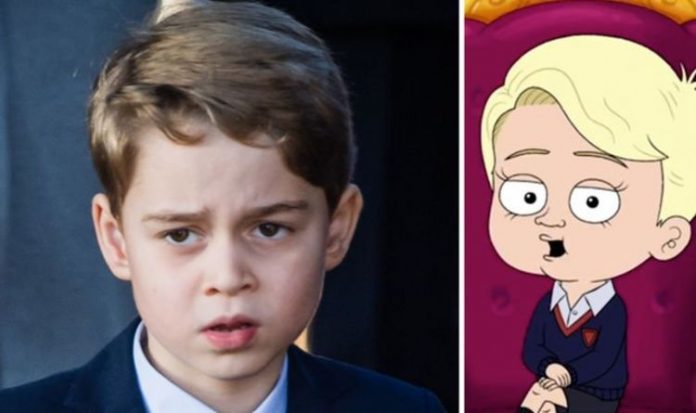 Hollywood producers have blasted the animated show for mocking the young Prince. The £5 million series sees George curse at staff members and joke about his sexuality. It comes as Netflix has drawn the anger of royal insiders for the family’s portrayal in their hit show The Crown.

A coronavirus themed trailer for The Prince sees George sitting on a throne mocking royal staffers.

The clips depicts George, voiced by former Family Guy writer Gary Janetti, saying: “Hey guys, it’s me, Prince George… I know self-isolating is difficult and we’re all sick of being stuck in the same 775 rooms, or, you know, studio apartment, it’s different for everyone.

“Stay positive and be nice to your serving staff. They’re doing the best they can, even though lunch f****** sucked today.”

Another clip from the show sees the animated Prince riffle through Kate, the Duchess of Cambridge’s handbag and say: “I can’t find the hand sanitiser, all I see are prescription bottles.”

READ MORE: Queen and Prince Philip ‘wait in line’ for weeks for coronavirus vaccine ahead of roll-out

The Prince is an upcoming sitcom for HBO Max, created by Mr Janetti focusing on George “who makes life hard for his family and the British monarchy”.

The former Family Guy writer has been roundly criticised by Hollywood producers for taking a “cheap shot” at George.

A rival producer at Disney Studios said: “It’s one thing for film-makers to play fast and loose with the truth in shows like The Crown but poking fun at a seven-year-old child seems cruel and unfair.

“Some things should be off-limits. It’s morally wrong to use a child to get cheap laughs.”

It comes as Netflix has been under fire from royal experts and insiders for its depictions of Prince Charles, Princess Diana and Camilla, the Duchess of Cornwall in The Crown.

Netflix recently refused to place a disclaimer before each episode of the hit series despite being urged to by Culture Secretary Oliver Dowden.

Speaking out for the first time amid the controversy surrounding the show, Netflix said: “We have always presented The Crown as a drama, and we have every confidence our members understand it’s a work of fiction that’s broadly based on historical events.

Netflix also promoted their documentary on the Princess of Wales, which uses private recordings, on Twitter with the caption: “The documentary Diana: In Her Own Words answers much of what you’re asking.”

Dickie Arbiter, Queen Elizabeth II’s former press secretary, then accused Netflix of inciting online trolls to do “their dirty work for them”.

Responding to the streaming giant’s tweet, he said: “Netflix has invested millions and they are going to defend their production to the hilt.

“With this tweet they are playing to the masses, getting other people to do their dirty work for them.”