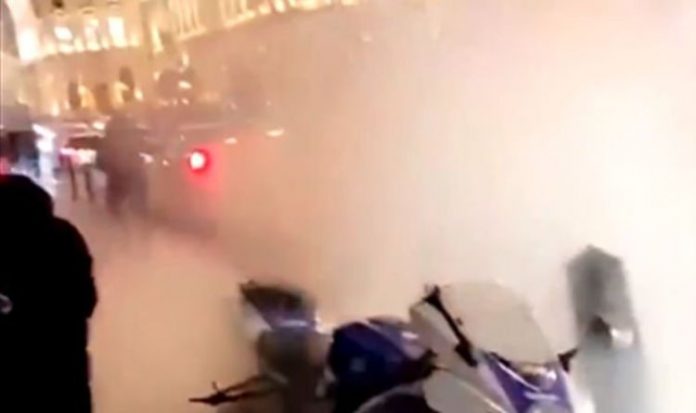 The unruly behaviour resulted in traffic jams along Pall Mall and extended towards Trafalgar Square.

Video from the scene shows several drivers revving their engines whilst breaking to produce large amounts of smoke.

A crowd gathered to watch and film the action.

In the clip, posted by the London 999 Feed on Twitter, a quad bike can also be seen driving on the pavement and smoke extends some way down the street.

A second video posted by Anne Mannion, a media lawyer, showed the scene from further away.

Clouds of smoke can be seen rising whilst a large number of onlookers had gathered around the cars.

“Boy racers back yet again.

“One car looks as if it is on fire.

Jambuster London, a Twitter account which provides travel advise for the capital, also warned about the event.

It posted: “A4 Waterloo Place (All Directions) at the junction of Pall Mall – the road is congested due to an unofficial event.

“Traffic is slow moving in both directions in Pall Mall.”

Another Twitter account messaged the police commenting: “Have you seen the mayhem going on at Pall Mall?

“Cars racing and driving anti-socially causing a gridlock of traffic.”