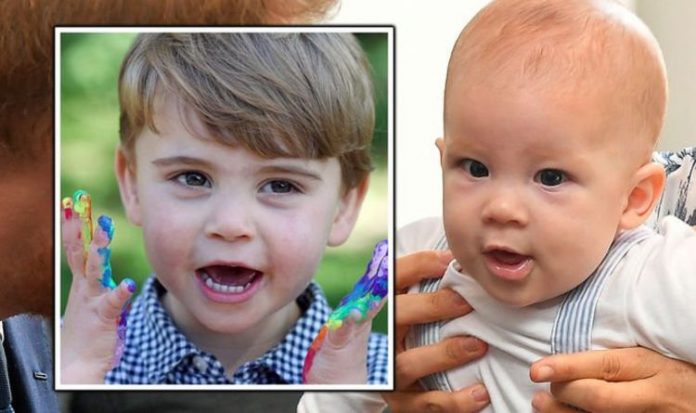 Prince Louis and Archie Harrison may live on other sides of the world, but that doesn’t stop the young royals sharing a hilarious trait that is sure to wind their parents up. The cousins are only a year apart in age, so their antics at home aren’t worlds apart for their young age.

The Duke and Duchess of Cambridge, as well as Meghan Markle and Prince Harry, have been busy during the coronavirus crisis, predominately taking part in video calls and conferences with their various charities and causes.

According to both sets of parents, their boys are both limelight hoggers – proven by their shared penchant for crashing their parents phone and Zoom calls.

The Duke Cambridge has said two-year-old Louis loves cutting off his parents calls with little warning.

Speaking on his The Heir Pod podcast, the royal expert said: “I loved discovering their daily Zoom calls with the various initiatives and people that they work with.

“And how Archie is no stranger to climbing in front of the web camera and making little impromptu cameos.”

Archie’s parents have kept him away from the spotlight now they have removed themselves from royal life, we have only seen the youngest royal a handful of times.

Most recently, Archie appeared on a video call with his mother Meghan as he celebrated his first birthday.

The Duchess of Sussex read one of Archie’s favourite books, Duck! Rabbit! to support the Save With Stories campaign in the US, and Save The Children in the UK – which helps kids who have been impacted by the COVID-19 pandemic.

Not seen by the public, he reportedly took part in a video call with his parents to wish his great-grandmother Queen Elizabeth II a happy 94th birthday in April.

Kate said: “I should’ve taken a photograph of what I looked like after as well!

“Luckily, that wasn’t documented but I was pretty much, I looked like Louis at the end of those.”

On a visit to a number of businesses this week, the prince visited Keltbray, a construction firm.

He said: “The children, especially Louis, would love to come and watch that, to see the diggers, they love it.”