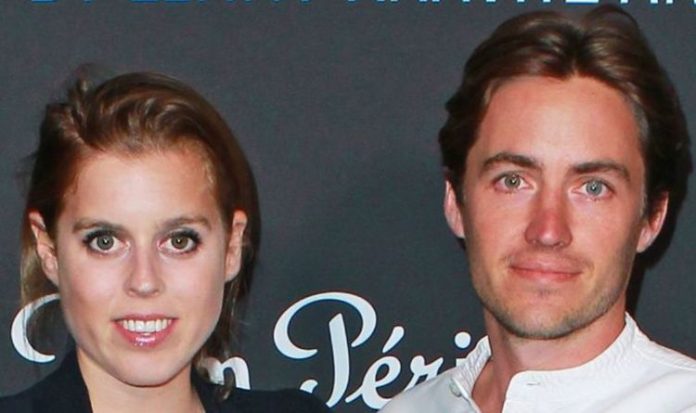 Princess Beatrice, 32, and Edoardo Mapelli Mozzi, 37, married in a low-key ceremony in July 2020, after having their original wedding plans cancelled due to the coronavirus pandemic. The nuptials took place at Royal Chapel of All Saints at Royal Lodge, which is on the Duke and Duchess of York’s Windsor estate, the Royal Lodge, in Windsor on July 17.

The wedding was attended by the Queen and Prince Philip as well as other members of the Royal Family.

The couple were forced to severely cut the numbers from their 150 person strong original plans, as weddings at the time were limited to 20 guests only.

In a statement, Buckingham Palace said at the time: “The private wedding ceremony of Princess Beatrice and Mr Edoardo Mapelli Mozzi took place at 11am on Friday, July 17 at The Royal Chapel of All Saints at Royal Lodge, Windsor.

“The small ceremony was attended by the Queen, the Duke of Edinburgh and close family.

“The wedding took place in accordance with all relevant government guidelines.”

Her dress was a gift from the Queen, originally worn by the monarch in 1962 to the premiere of Lawrence of Arabia.

Originally designed by Norman Hartnell, the dress was redesigned with a new skirt for the occasion.

Buckingham Palace released a statement on the dress, saying: “The dress is made from Peau De Soie taffeta in shades of ivory, trimmed with ivory Duchess satin, with organza sleeves.

Beatrice, who is ninth in line to the throne, is not a full-time working royal but works for Afiniti, an artificial intelligence software firm, where she is vice president of partnerships and strategy.

Mr Mapelli Mozzi is the son of former Olympic skier Count Alessandro Mapelli Mozzi and Nikki Williams-Ellis and is a count himself.

The princess has also become a stepmother in her marriage to Edo, as her husband has a young son named Wolfie with ex-fiancee Dara Huang.

Prior to their marriage, the couple had been dating for approximately three years.

They made their first public appearance together at the National Portrait Gallery’s 2019 Gala.