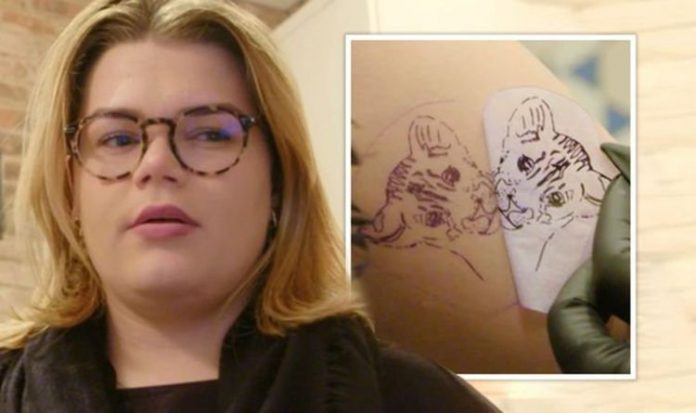 Monaco is one of the richest regions on the planet: around 30 percent of the population are millionaires. Monegasque, meanwhile, the country’s native population, enjoy equally good living standards, with state subsidies on rent and guaranteed work in the pricey and well-paying principality. Monaco’s royal family is attributed with keeping the region alive and wealthy, with Prince Rainier III – the “builder Prince” – having transformed the country in the Fifties.

Now, his son and heir, Prince Albert, rules over the region.

Albert’s niece, Camille Gottlieb, enjoys being part of this exclusive elite, while also having the perks of private and normal life.

In an unprecedented move, she showed off her tattoos during the BBC’s documentary ‘Inside Monaco: Playground of the Rich’ – this, despite her royal blood.

She explained: “I started having tattoos when I was 17.”

Prince Albert: The royal took over following his father’s death in 2005 (Image: BBC)

When asked whether she had to persuade her mother, Princess Stephanie, Albert’s youngest sister, Camille surprised viewers.

She said: “No, she was fine with it – she has tattoos too, so it was always ok with her.”

It isn’t the only unusual aspect to the family, as Albert’s mother, Grace Kelly, before marrying into the family in 1956 was a world-famous Hollywood actor.

She starred in 11 big-hitting films during her career and two theatre productions.

Monaco: The principality is one of the wealthiest regions on Earth (Image: GETTY)

Best-known were her central roles in Hitchcock’s Dial M for Murder and Rear Window.

Camille reflected on what it was like to be the granddaughter of Grace.

She said: “To be the granddaughter of Prince Rainier and Grace Kelly, and the daughter of Princess Stephanie – we are the royal family so we have to do a lot of things for Monaco so it’s good for us.”

She is one of three children, and has a brother, Louis Ducruet, and a sister Pauline Ducruet.

While her siblings are included in the line of succession to Monaco’s throne, Camille is not.

This is because she shares a different father.

While her brother and sister are the offspring of Stephenie of Monaco’s first husband and bodyguard, Daniel Ducruet, Camille was born out of wedlock.

Jean’s identity was hidden for a while, though it came to light some years after Camille’s birth in 1998.

It has led to bouts of confusion for Camille, but she expressed her love for her father during a rare interview with the French publication Point de Vue.

The 21-year-old opened up about her family and said: “My father is my right lung, my mother is my left lung. Without them, I could not live.

“They did not stay together very long, but they always said to me, ‘We have desired you, and our happiness is that you are here.’”

She added, “I am very lucky. I would not trade my family for another for nothing in the world.”