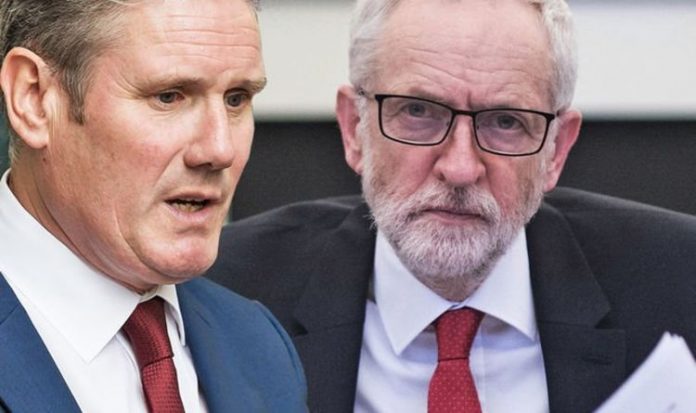 Labour’s internal battles over its more extreme elements appear to be bleeding into the mainstream following the party’s National Executive Committee (NEC) election results. While both sides – Left and Centreground – claimed victories, it is clear that socialism in the party is not yet dead, despite Mr Corbyn’s suspension over two weeks ago. Candidates backed by Momentum, the grassroots left-wing group, swept in to take seven of the 15 available positions, one successful bid being Laura Pidcock, an important member of Mr Corbyn’s shadow cabinet.

Mr Corbyn was suspended by the party following his comments in light of the Equality and Human Rights Commission (EHRC) report on antisemitism under his leadership.

Condemning antisemitism as a “cancer”, he appeared to evade any responsibility for the report’s findings, and said: “The scale of the problem was also dramatically overstated for political reasons by our opponents inside and outside the party, as well as by much of the media”.

New leader Sir Keir Starmer – who has announced that Labour is under “new management” – has since hinted Mr Corbyn might be allowed back into the party should he “reflect” on his comments.

Jeremy Corbyn: The former leader is poised to become a ‘martyr of the Left’ (Image: GETTY)

Labour NEC: Laura Pidcock is among several Corbynites to win places on the committee (Image: GETTY)

Yet, as Time Bale, Professor of Politics at Queen Mary University, told Express.co.uk, with Mr Corbyn being a “proud” politician, he might never give in to re-entry on Sir Keir’s terms, in the process becoming a “martyr of the Left”.

Prof Bale explained: “He’s been in the party an awfully long time.

“Although there may be many people in the party who don’t like Corbyn’s politics, he presumably feels that’s his natural home, he wouldn’t be keen to go anywhere else in politics.

Corbyn news: The former leader was suspended following his comments on the EHRC report (Image: GETTY)

“But, as we know, Corbyn is the best of an awful lot of pride, to the extent that some people have accused him of being something of a narcissist.

“It could be that maybe, he does decide he can’t come back on anyone else’s terms and therefore sets himself up as something of a martyr on the left – I wouldn’t put it past him.”

Sir Keir has said he will not “interfere” with the party’s internal investigation into Mr Corbyn’s statement, of which will be carried out by the party’s General Secretary, David Evans.

Shortly after Mr Corbyn’s suspension, Mr Evans sent an email out warning local party officials that he will “not hesitate to take action” should they allow members to discuss Mr Corbyn and the EHRC report.

A number of Labour members – including Ms Pidcock- and affiliated staff have called for the reversal of Mr Corbyn’s removal.

Most notably was Unite the Union’s General Secretary Len McCluskey’s warning earlier this month, suggesting the move could result in “chaos” for the party and cost Sir Keir the 2024 election.

It is worth noting that Unite is Labour’s biggest single donor.

Other union top brass were also enraged by the move.

Howard Beckett, Unite’s “hardman” Assistant General Secretary for Politics and Legal issues suggested Sir Keir had misread the report’s findings, and tweeted: “Perhaps you Sir want to explain why you take a different view than the EHRC?”

Meanwhile, Dave Ward, General Secretary of the Communications Workers Union, said the EHRC report was “well-balanced”, although added that the decision “reeks of political opportunism”.

Despite the pushback, it appears as if Sir Keir’s actions have resonated with the public.

According to the latest YouGov data available, voting intention in Britain has tipped towards the Labour party.

If there was a general election tomorrow, 35 percent of the country would vote for the Tories, while 40 percent would choose Sir Keir to lead the way going forward.