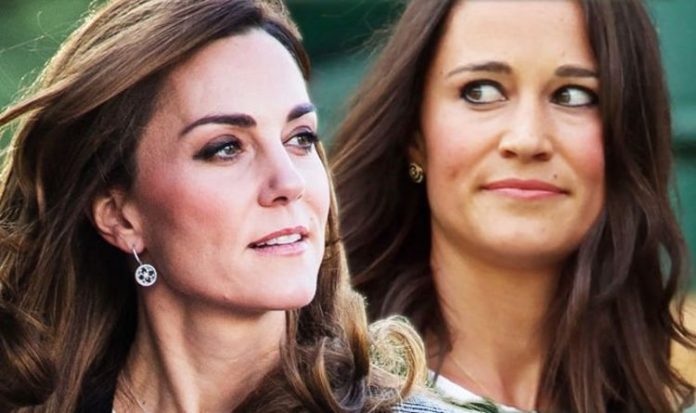 The Royal Family has had its fair share of what might be called “rivalries”. Prince Charles has reportedly had a precarious relationship with his siblings. Perhaps the best example comes in the form of Prince Harry and William, who are believed not to have talked for months following the former’s departure from the Firm.

This came after he and Meghan Markle felt they were being pushed to the sidelines as William and Kate prepare for their future roles.

Less known is the rivalry between Kate and her sister, Pippa Middleton.

The pair are known to be extremely close – and only just over a year separates them in age.

They went to the same boarding school, same university, and have largely been each other’s best and closest friend.

Royal news: The sisters have learned to become more subtle with their competition in adulthood (Image: GETTY)

Kate Middleton: The Duchess and Pippa are just a year apart in age and grew up on the same footing (Image: GETTY)

However, royal author Andrew Morton claimed that the pair have ended up often rubbing each other up the wrong way.

In his book ‘William & Catherine: Their Story’, Mr Morton’s said the sisters have a long-standing rivalry with each other.

Other reports have suggested that this rivalry was more pronounced in their younger days, often expressed through sport or academic achievements.

But, as they entered adulthood, Mr Morton said the Middleton sisters remain secretly “very competitive” but have learned to be more subtle about it given their high profiles.

JUST IN: Prince William just as ‘smitten by babies as his wife’ Kate Middleton

Royal sports: Kate and Pippa were said to have been competitive especially in sports at school (Image: GETTY)

In 2008, a family friend of the Middleton’s told The Scotsman that the Duchess was always worried that Pippa would somehow overshadow her.

The source said: “Kate was always quite jealous of Pippa.

“I sensed that she feared being eclipsed by her, because Pippa has more natural effervescence, is socially much more at ease and was always popular with everyone, especially James’s friends.

Pippa Middleton: The sisters pictured heading for a night out in London, 2008 (Image: GETTY)

“The two sisters are certainly close, but there was always a real sense of rivalry between them. Probably still is.”

The Daily Express has also been told about the sisters’ inseparable bond yet constant one upmanship.

Emma Sayle, who attended Downe House with the girls, told the paper in 2010: “Kate and Pippa were hugely competitive.

Mr Morton has also previously commented on how Kate would have been shocked at the attention Pippa received at her 2011 royal wedding to William.

When asked how Kate might have felt, he said he thought she would have been (shocked),” with the amount of press Pippa received afterwards.

“It’s amazing what a pert backside can do,” he said.

Pippa Middleton wedding: Kate didn’t play a central role in Pippa’s wedding so as not to distract (Image: GETTY)