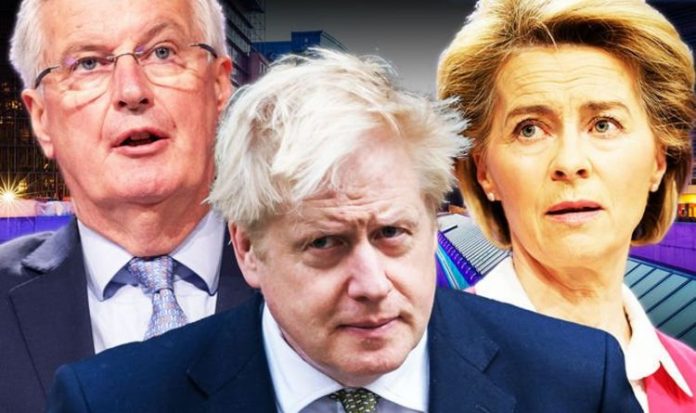 With the transition period ending in December, talks for a post-Brexit trade deal have reached a crucial stage. Prime Minister Boris Johnson is reportedly planning an intervention to try and break the deadlock between London and Brussels. Reports suggest he will speak with European Commission President Ursula von der Leyen to accelerate talks and reach an agreement on fisheries, regulation and the Irish border. A source close to the UK negotiating team said that “both sides seem to think they will get a deal over the line”, with negotiators close to agreeing “an awful lot of things”.

Yet, the insider claimed, “nothing is certain” and there are still “areas of disagreement”, including state aid.

They added, according to the Telegraph: “We are not in the final moments yet but this week will see the start of the final push.

“I would expect that at some point this week the Prime Minister or Ursula von der Leyen will have to make an intervention.”

EU chief negotiator, Michel Barnier, has demanded throughout the talks that the UK abide by a level playing field on regulation, as well as keep British waters open to European fishermen.

DW’s Brexit analyst, Alex Forrest Whiting, highlighted that this policy has been adopted by Brussels to prevent the UK from becoming a significant rival on the EU’s doorstep.

She said during a live broadcast last week: “Europe does not want to have a big rival on its doorstep.

“It wants to make sure that the UK is not going to end up subsidising companies and therefore become a threat.”

She highlighted, however, how this has caused frustration from the Government.

Ms Forrest Whiting added: “The UK is saying, ‘Look, we need to be able to set our own rules'”.

This was a concern raised by Conservative MP and Brexiteer, Andrew Bridgen, who told Express.co.uk that the EU’s demands could not be met.

This provoked Brussels to launch legal action, and now the House of Lords has voted to force the Government to seek the consent of the devolved administrations before using powers contained in the controversial Internal Market Bill.

An open border between Northern Ireland and the Republic of Ireland is pivotal to peace in the region, as enshrined in the Good Friday Agreement, signed on 10 April 1998.

The accord ended most of the violence of the Troubles, a political conflict in Northern Ireland that had raged since the late 1960s.