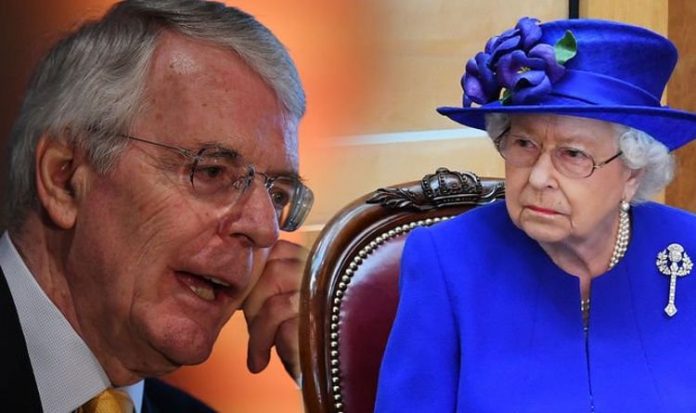 1992 is known as the year when the Royal Family, with the Queen at its helm, was on the brink of breaking down. It was reportedly particularly devastating for Her Majesty, who referred to it as an “annus horribilis”. In a speech at Guildhall to mark the 40th anniversary of her accession, Her Majesty admitted: “1992 is not a year on which I shall look back with undiluted pleasure.

“In the words of one of my more sympathetic correspondents, it has turned out to be an ‘annus horribilis’.

“I suspect that I am not alone in thinking it so.”

Not only was the separation of two of her children announced – Prince Andrew and Sarah, Duchess of York in March and Prince Charles and Diana, Princess of Wales in December – but Princess Anne’s divorce to Captain Mark Phillips was also finalised.

Diana’s tell-all book ‘Diana: Her True Story’ – which revealed her marital problems – was also published in June of that year.

Finally, in November 1992, a fire broke out in Windsor Castle, forcing the ceiling of St George’s Hall to collapse and a number of apartments to be burnt.

Despite the scandals and the sustained period of “intrusive and intolerable” criticism, the royals came out of it stronger – and according to unearthed reports, it was all thanks to former Prime Minister John Major.

Confidential Cabinet minutes released at the National Archives in 2017 reveal that the former Prime Minister decided there was an urgent need for his Government to voice public support for the sovereign.

In a rare insight into dealings between ministers and Buckingham Palace, a memo of a Cabinet meeting on November 26, 1992, reveals how Sir John told his colleagues that some months previously the Queen had approached him to “consider arrangements by which she could pay the equivalent of income tax on her private income”.

Noting that Prince Charles had made a similar offer, the former Prime Minister said “recent unjustified media criticism” of the Queen’s exemption from income tax had persuaded him to bring forward an announcement that she would pay into the public purse – the first monarch to do so since the Thirties.

However, minutes of the meeting show that Sir John, who railed against “intrusive and intolerable” media coverage of the Royal Family after a succession of stories about the state of its members’ marriages, wanted to go further and effectively launch an Establishment PR campaign – including leading clerics – to shore up public support for the House of Windsor.

The minutes recorded: “This gesture [paying income tax] would not by itself change the behaviour of the media and some would represent it as resulting from their pressure.

“The Government should reinforce the Queen’s initiative by strong expressions of support for the institution of the Monarchy. The Prime Minister might consider making this the centrepiece of a major speech in due course. Support from other leading figures in public life, such as the Archbishop of Canterbury and the Cardinal Archbishop of Westminster, could also be timely.”

In 2017, the Cabinet Office denied the files had been deliberately withheld to prevent difficult revelations.

A spokesman said: “We have to ensure all files are properly reviewed and prepared before they are transferred, so that they do not harm national security or our relations with other countries or disclose the sensitive personal information of living individuals.”

2019 may also go down in history as the Queen’s “annus horribilis, Part II”.

In a column for the Daily Telegraph, royal expert Camilla Tominey wrote: “First we had the allegations surrounding Prince Andrew’s friendship with the convicted paedophile Jeffrey Epstein.

“Then the Queen was dragged into a constitutional crisis over Brexit.

“And now the Duke and Duchess of Sussex have given a television interview that feels on a par with Princess Diana’s explosive sit-down with Panorama.

“By seeming to suggest that she can no longer continue in the Royal Family as it stands, Meghan appears to be not only casting aspersions on the British tabloids but also The Firm she married into.”

Jeffrey Epstein was arrested in July on federal sex trafficking and conspiracy charges related to the alleged abuse of hundreds of girls.

The Duke of York – once a friend of the American financier – denied any involvement with Epstein’s “abhorrent” activities through several statements from the Palace.

In August, Prime Minister Boris Johnson gained the Queen’s approval to suspend Parliament for five weeks, before the planned opening of a new session on October 14.

There was never a suggestion she would reject that as her neutral role requires she takes the advice of the Government in power.

However, the Supreme Court ruled the prorogation unlawful, meaning Her Majesty gave her approval to an unlawful act on the advice of the Prime Minister.

To make things arguably worse, in January this year, the Duke and Duchess of Sussex stepped down as senior members of the Royal Family.