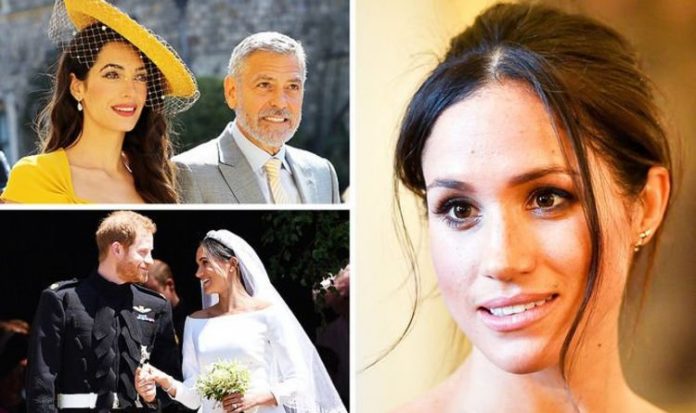 The Queen’s grandson tied the knot in a ceremony in St George’s Chapel, Windsor, two years ago. Despite there being a lengthy list of A-list celebrities who attended Meghan and Harry’s big day, it was the cheeky expression of page boy Brian Mulroney, seven, that grabbed the headlines. The royal nuptials was compared to a red carpet event due to all the well-known faces and was watched by more than 1.9 billion people worldwide. But recently it has been claimed that the couple’s closeness to some of their famous guests may have been overstated.

Among the 600 ‘nearest and dearest’ at the ceremony were Sir Elton John, David and Victoria Beckham, Idris Elba, Oprah Winfrey and Meghan’s castmates from the US show Suits.

Hollywood star George Clooney and his wife Amal, a human rights barrister, were also in attendance and were reported to have been given a “prime pew” to watch the service.

They sat next to Lady Carolyn Warren, whose husband John is the Queen’s bloodstock adviser – a specialist who oversees Her Majesty’s horse breeding and racing interests.

Despite the Clooneys being located in a prized position during the wedding, it was claimed that they were less close to Meghan and Harry than previously thought.

Journalist Rachel Johnson recounted a “story doing the rounds” at the nuptials, which cast doubt over their closeness.

She claimed the disclosure originated from Carolyn Bartholomew, one of three women to have shared a flat with Princess Diana in Earls Court, London.

The friend was among very few people that were privy to the late Princess’ early dates with Prince Charles and was later announced as Prince Harry’s godmother.

Ms Johnson explained that Ms Bartholomew was “waiting for the wedding service to start” when she decided to spark conversation with those around her.

The writer continued: “She turned to the couple alongside her and asked how they knew Harry or Meghan.

“‘We don’t’, the Clooneys answered brightly.”

In addition to their privileged position at the wedding, the celebrity couple was also among 200 guests invited to Meghan and Harry’s wedding reception at Frogmore House.

It was reported that George Clooney was the last man on the dancefloor at the celebration and danced with both Prince Harry’s wife and Kate Middleton.

Ms Johnson’s Clooney claim, which was published in an AirMail article in October, contradicted accounts in the Meghan and Harry biography Finding Freedom.

The book reported that there had been a closer connection between the royals and the Clooneys – but neither side has confirmed nor denied any of the accounts.

It was claimed that the Clooneys had met Meghan and Harry on at least two occasions, including at the celebrity’s holiday home in Sonning, Oxfordshire.

Finding Freedom stated that the royal couple brought their dogs with them and that the Clooneys had a history of wining and dining friends by the lake.

The book also claimed that Harry and Meghan were invited to join the Clooneys at Lake Como, weeks after the royal wedding.

There the two ladies were reported to have “spent a lot of time relaxing by the pool and playing with the twins”, Alexander and Ella Clooney.

Harry was said to have “checked out George’s motorbike collection” and later “took one of them out with one of his protection officers”.

Amal Clooney was also reported to have flown out on a private jet to celebrate Meghan’s baby shower in New York back last year.

Questions about their connection remain unanswered but could be addressed during an interview with George Clooney tonight.

The celebrity is due to appear on The Graham Norton Show, which airs at 10.45pm on BBC One.

Finding Freedom was written by Omid Scobie and Carolyn Durand and published by HQ in August. It is available here.