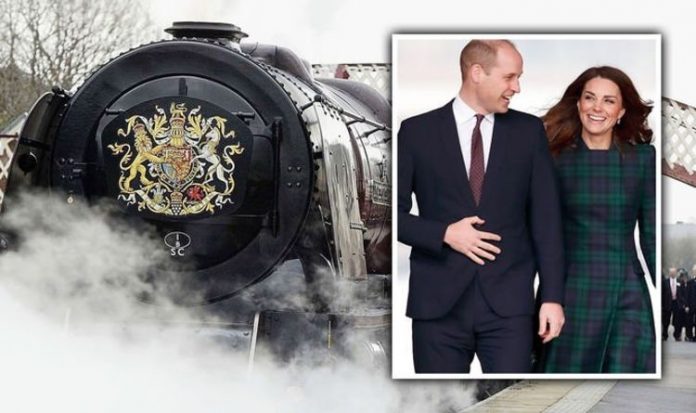 On Sunday Prince William and Kate, Duchess of Cambridge will board the Royal Train and commence their three-day royal tour. Kate and William will make 10 stops in England, Scotland and Wales along the 1,250-mile journey. The Duke and Duchess will meet with key workers and outstanding individuals, to give their thanks for their hard work during the coronavirus crisis.

Organisations supported by community relief funds, such as NHS Charities Together, will be celebrated during the tour, and the couple’s visits will also highlight the arts sector, which has suffered significantly during the pandemic.

A spokeswoman for Kensington Palace said: “The Duke and Duchess are very much looking forward to shining a spotlight on the incredible work that has been done across the country throughout this difficult year and to sharing their gratitude on behalf of the nation for all those supporting their local communities ahead of the Christmas holidays.”

During the visit Kate and William will visit care homes, schools and food banks, as well as groups of people at a social distance.

Travelling via the Royal Train is considered a prestigious honour, with only the Queen able to permit people to use the service.

According to the Daily Mail, Kate and William will visit the Queen at the end of their trip next week.

Prince Philip, Prince Charles and Camilla, Duchess of Cornwall will also be present for the meeting, and the six senior royals will pose for their first official photograph together this year.

Although she has been a senior member of the Royal Family since 2011, this trip is thought to be Kate’s first time travelling via the Royal Train.

Prince William has made several trips on the train, including to visit his mother Princess Diana’s ancestral home Althorp after her funeral in 1997.

The train consists of nine carriages, with a carriage each reserved for the Queen and Prince Charles when they use it.

The Queen’s carriage is air-conditioned and electrically heated, and features its own bedroom, sitting room, desk and dining area.

The Queen’s quarters also includes a bathroom and a full-sized bath.

As for the train’s exterior, the train is painted a burgundy colour known as Royal Claret, and the train is emblazoned with royal crests with black coach lining and a grey roof.

The royals are said to like the transportation method for its efficiency, as overnight trips can be made which reduces the need for a really early start.

The train has also been used in the past by the Royal Family for trips to Sandringham in Norfolk and Balmoral in Scotland.

The train operates on eco-friendly biofuel made from waste vegetable oil, but the train is not regularly used nowadays due to the costs involved.

The trains journeys made by the Royal Family during the year of the Golden Jubilee in 2002 cost £872,000 of taxpayer money.