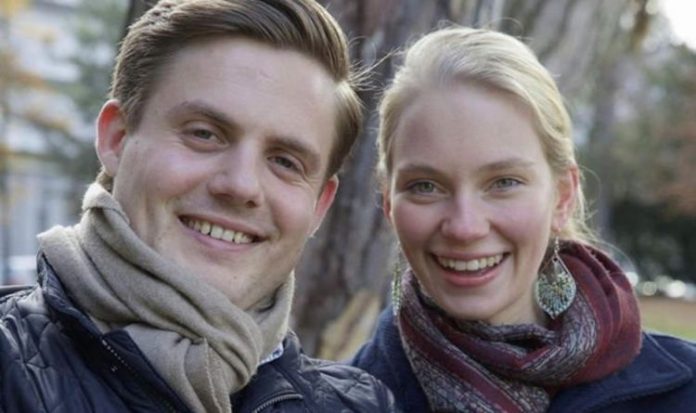 Imperial and Royal Highness Archduchess Gabriella of Austria will reportedly marry her fiancé HRH Prince Henri of Bourbon-Parma this September. Henri asked 26-year-old Gabriella to tie the knot on October 22 2017, just a week before the birth of their daughter Victoria Antonia Marie-Astrid Lydia.

After they maintained a long-distance relationship while Henri was studying law in Copenhagen, the couple settled down in Switzerland.

Henri and Gabriella are second cousins as they are both great-grandchildren of Grand Duchess Charlotte of Luxembourg and her husband Prince Félix.

But Gabriella’s side of the family also has an interesting link with the British Royal Family.

Her mother, Princess Marie-Astrid of Luxembourg, is the elder daughter and eldest child of Grand Duke Jean of Luxembourg and Joséphine-Charlotte of Belgium.

This made her one of the few remaining princesses from European reigning houses – and considered by match-makers an ideal candidate for marriage to Charles, the Prince of Wales.

Reports flurried about the prospects of such a marriage between two royal households in the 1970s.

At the beginning of that decade, Prince Charles had already met Camilla Parker Bowles, who in 2005 would become his second wife.

But over the following 10 years, the Prince of Wales reportedly dated several women, including the grand-daughter of Lord Louis Mountbatten, his mentor, Lady Amanda Ellingworth.

Prince Henri is the member of the Bourbon-Parma house, a cadet branch of the Spanish Royal Family whose members once ruled as King of Etruria and as Duke of the Italian cities of Parma and Piacenza, Guastalla, and Lucca.

A member of the Bourbon-Parma house, Prince Sixtus Henry, is considered the Regent of Spain by some Carlists, a movement aiming to establish in Madrid a different branch of the Bourbon dynasty.

Henri is the son of Prince Erik of Bourbon-Parma and Countess Lydia Holstein-Ledreborg.

The aristocrat grew up in Paris before fleeing to New York to escape the German invasion.

Aged 17, he joined the US Army and was parachuted into Nazi-occupied France to operate behind enemy lines.

In 1945 he was moved to Indochina to fight a national independence coalition called Viet Minh born in 1935.

However, he was found and held captive for 11 months with five more soldiers – four of which were killed.

After being freed, Prince Michel was awarded the British Military Cross and the Croix de Guerre.