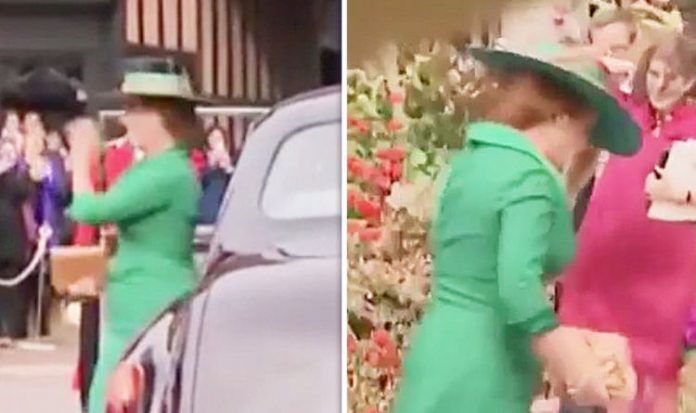 Sarah Ferguson was nearly the victim of a fashion blunder as a strong gust of wind forced her to hold on to her hat to avoid it being blown off.

The Duchess of York, rocking a simple yet very elegant emerald dress, was seen clinging to her hat as she walked up the 20 steps to the Chapel to assist to Princess Eugenie’s wedding.

The mother of the bride beamed as she stepped from her car, accompanied by eldest daughter and maid of honour Princess Beatrice.

Sarah and Beatrice, in royal blue, prompted another cheer as they turned to smile and wave to the crowds from the top of the steps

Her bag was carried by her late mother Susan Barrantes at the duchess’s 1986 wedding to the Duke of York.

Fergie was rumoured to be planning a touching tribute to her close friend the late Princess Diana at her daughter’s wedding next week.

Richard Fitzwilliams, royal commentator, said the Duchess of York may well choose one of Diana’s favourite hymns to play at the October 12 wedding, which would “please” her nephews Prince William and Prince Harry.

The hymn ‘I Vow To Thee My Country’ would be significant because it was sung at both Princess Diana’s 1981 Royal Wedding to Prince Charles and her funeral after she died in a car crash in 1997.

The public had their cameras and phones at the ready at the West Door eager for the first glimpse of Princess Eugenie as she arrived with her father in the Queen’s Rolls Royce Phantom VI.

As the bride waved from the car one woman in Horseshoe Cloister remarked: “Oh, she looks stunning.”

Onlookers waved small union flags as she ascended the steps with the Duke of York, who at one stage moved to help fix her train.

Despite divorcing in 1996, Prince Andrew and Sarah have remained close friends. The pair married in 1986 before their relationship broke down ten years later.

Sarah often accompanies her daughters to events like the Royal Ascot and church services.

Jack could be seen reaching for Eugenie’s right hand as his cousin Charles Brooksbank delivered his speech in front of the congregation.

Princess Eugenie could also be seen lovingly holding her husband’s hand while adoringly smiling at him.

As Eugenie walked down the aisle Jack was forced to momentarily remove his glasses to dry his tears.