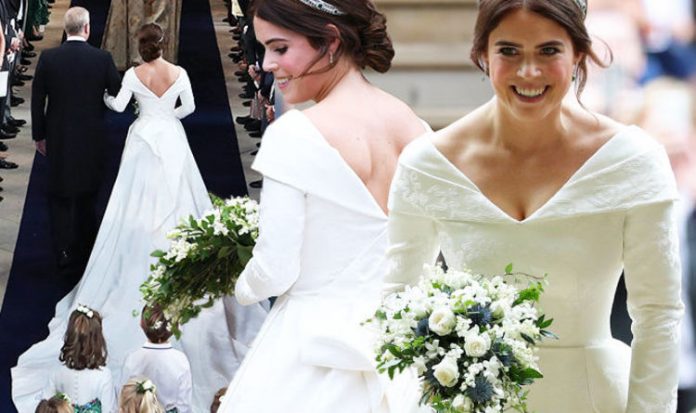 Princess Eugenie, 28, the Queen’s sixth grandchild, was cheered by royal well-wishers as she arrived at St George’s Chapel for her wedding to her wine merchant fiancé Jack Brooksbank.

Jack burst into tears as he first spotted Princess Eugenie entering St. George’s Chapel ahead of their wedding ceremony.

Jack was forced to momentarily remove his glasses to dry his tears before the ceremony started and was forced to take them off completely as Princess Eugenie joined hit at the altar.


I think you can change the way beauty is, and you can show people your scars

Speaking ahead of the wedding, Eugenie hinted her dress would be backless and will not cover her surgery scars.

During an interview on ITV’s This Morning, Eugenie said: “I think you can change the way beauty is, and you can show people your scars.”

The 28-year-old, who was diagnosed with scoliosis when she was 12-years-old, underwent a successful operation to straighten her spine after treatment at the Royal National Orthopaedic Hospital in London.

The Princess said: “I’m patron of the Royal National Orthopaedic Hospital’s Redevelopment Appeal of their appeal and I had an operation when I was 12 on my back, and you’ll see on Friday, but it’s a lovely way to honour the people who looked after me and a way of standing up for young people who also go through this.”

Father-of-the-bride Prince Andrew revealed he had to make accommodations to ensure he can walk Princess Eugenie down the aisle because of a specific aspect of her wedding dress.

Ahead of the ceremony, Prince Andrew said: “I don’t think many people know anything about this dress.

“All I know is, as you would expect, there is a train. I believe the train is quite wide, I’ve got to walk on the left of the carpet to make sure she can walk in the middle of the carpet.”

Kerry Evans, 54, from Lincolnshire, has been in the crowds of both royal weddings this year.

The Queen and Prince Philip and Prince Charles – without his wife Camilla – also attended the wedding.

The monarch, who arrived with the Duke of Edinburgh, was wearing an ice blue Angela Kelly coat, dress and hat – with large gold and diamond buttons and an ice blue and peach scalloped lame dress.

Eugenie and Jack, who started dating in 2010, married at the same venue as Prince Harry and Meghan Markle.

There will be a reception after the marriage in the Windsor grounds, which will comprise a funfair and festival-themed party day.

Over 850 guests have been invited to the ceremony – more than St George’s chapel 800 person capacity allows.

The celebration will last for two days, with the second day more casual and a high celebrity turn-out expected.