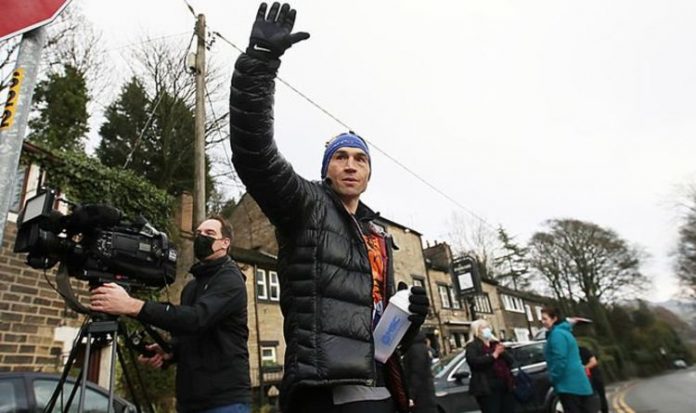 The Leeds Rhinos director of rugby set out on the challenge to raise £77,777 in honour of his great friend and former teammate Rob Burrow, who wore the number 7 shirt for the club and now suffers with motor neurone disease. Last night the total was racing towards £1.5million for Rob and the Motor Neurone Disease Association. Kevin and Rob played together at Leeds in Super League for 15 seasons. Rob, 38, was diagnosed with the disease 12 months ago. Some of the money raised will go towards ensuring his family have a secure future and the rest will be given to the charity.

Kevin, 40, said he was “massively surprised and just blown away by the support”.

He added: “Rob’s felt it. I get a text off him every night to say how grateful they are.”

He went on: “We’ve been really proud to wear the vest with number seven on, what that represents with Rob and his family.

“But also to have the MND association on the front, to run in their colours, to understand the work that they do and the difference they make to so many families.

“Especially this week, I’ve heard so many different stories about how horrific this disease is. This money will make a huge difference. To get over a million quid, I couldn’t have dreamt of anything better.

“It will change a lot of things, hopefully. The awareness is crucial. We need to find a cure, don’t we.”

Oldham-born Kevin came up with the marathon plan just two months ago but completed each 26.2 mile circuit in under four hours.

He said: “I did three in three (days) as part of my training at the end of October – pretty dark days.

“But during this I’ve been really energised. The team have been incredible, they’ve kept talking to me, singing, playing music. Yesterday was tough and a challenge but we knew we just had to get it done.”

Kevin won seven Super League titles and two Challenge Cups in a glittering playing career but put this achievement at the top of the list.

He said: “To be able to do something and help people, get the opportunity to make a difference, to raise over £1million for something that is very, very close to home when he’s a real good friend is really, really important. It’s top of the list this, definitely.”

Ian Gardner, head of development in the association’s fundraising team, said: “There’s a huge amount we can do with this money across all areas of our work – research, care, support, campaigning and awareness raising.”