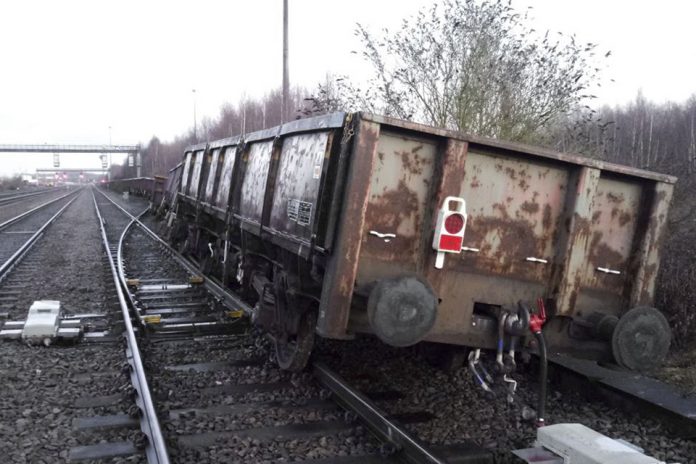 At 04:42 hrs on 17 January 2021, a rake of 22 wagons ran away from a siding within Old Bank sidings at Toton. Twenty-one wagons were loaded and the full rake had a reported weight of about 1870 tonnes.

As it ran away out of the siding, the rake passed a red signal, which generated an alarm on a signaller’s workstation in the East Midlands Control Centre. This alerted the signaller, who could see that track sections along the line leading away from the exit to the sidings were being occupied. The rake then passed a second red signal and, a short distance later, the leading four wagons derailed at the end of the run-out rails associated with a set of trap points at Toton South junction. The trap points worked as intended to derail the unauthorised movement. However, the front two derailed wagons stopped foul of the adjacent running line, although no trains were nearby when the derailment occurred. The rake of wagons ran away for a total distance of about 0.5 miles (0.8 km).

Our investigation will seek to identify the sequence of events which led to the accident. It will also consider the processes that were in place for securing trains within the sidings, any factors relevant to how the risk of runaway wagons from within the sidings was being managed, the performance and design of the trap points, and any relevant underlying factors.

Our investigation is independent of any investigation by the railway industry or by the industry’s regulator, the Office of Rail and Road.

We will publish our findings, including any recommendations to improve safety, at the conclusion of our investigation. This report will be available on our website.

You can subscribe to automated emails notifying you when we publish our reports.