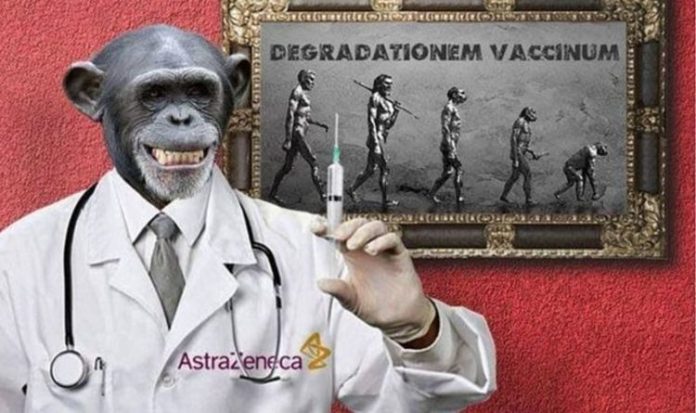 Foreign Secretary Dominic Raab condemned the bid to undermine the vaccine as “utterly deplorable” while scientists warned the publication of false information posed “a clear risk to public health”. The extraordinary attacks on social media include pictures, memes and video clips designed to spread fear about the British vaccine.

Crude imagery suggests the vaccine could turn people into monkeys because it uses a chimpanzee virus in tests – even though it is a common practice in vaccine development.

One meme even portrays Boris Johnson as a yeti walking into Downing Street under a caption which reads: “I like my bigfoot vaccine”.

Another shows a chimpanzee in a white lab coat brandishing a syringe while another features Uncle Sam with the message: “I want you – to take the monkey vaccine”.

The smear campaign is thought to be aimed countries where Russia wants to sell its own Sputnik V vaccine as well as at Western nations.

Mr Raab warned the campaign could cause damage at a time when the world should be coming together to fight COVID-19.

He told the BBC Radio 4 Today programme: “It’s a shabby piece of disinformation but it is very serious because it is an attempt to disrupt the attempts to find a safe vaccine.

“We know that Russia has a track record of using disinformation as a foreign policy tool, but actually any attempt to spread lies about COVID-19, and the vaccine in particular, when we’re trying to come together as an international community to resolve a global pandemic is utterly deplorable.”

The crude imagery was featured in Russia’s answer to Newsnight (Image: NC)

Oxford vaccine director Prof Andrew Pollard said fear campaigns about vaccines in a time of crisis were a “risk for all of us”.

He told the Today programme: “Anything that undermines trust in the public health approach we’re taking could be extremely dangerous.

“Vaccines are such an important cornerstone for children.

“Anything that drives that wider view in societies around the world that there is something unsafe about them, really risks their health.”

Pascal Soriot, chief executive of AstraZeneca, the pharmaceutical giant that plans to mass-produce the Oxford vaccine if cleared for public use, said it is important that the public is not deceived by such actions.

He said: “Misinformation is a clear risk to public health. I urge everyone to use reliable sources of information, to trust regulatory agencies and to remember the enormous benefit vaccines and medicines continue to bring to humanity.”

Speaking on Good Morning Britain, he said: “Oxford have a very reliable team, remember, that’s where penicillin was worked-up and produced for the Second World War.

“Oxford have a fantastic reputation, they are doing this thoroughly and are looking at thousands of people from all different groups and ages.

“They are doing this safely and effectively and for the Russians to try to besmirch what they are trying to do because parts of the vaccine comes from chimpanzee material is utterly ridiculous and shameful.

“I would put my money on Oxford every time.”

The smear campaign comes after Britain, the United States and Canada earlier this year accused Russian spies of trying to steal details of coronavirus vaccine research being carried out in other countries.

Earlier this week, new M15 director-general Ken McCallum said the agency had been involved in protecting the “integrity” of UK research.