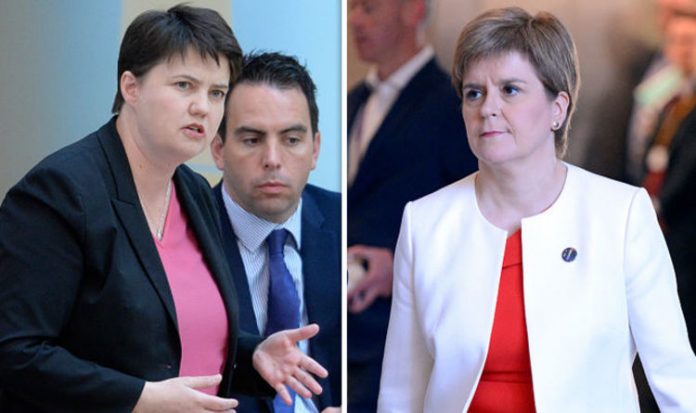 Ruth Davidson, the Scottish Conservatives leader, said it was time for Ms Sturgeon to listen to voters “for once” and use her statement during the re-opening of Holyrood as a chance to rule out holding another ballot.

Ms Sturgeon will announce her programme for government on Tuesday when MSPs return to the Scottish Parliament after summer recess.

It was time for the SNP to “wipe the state clean and start again”, she said.

Ms Sturgeon has already revealed she will bring forward 12 pieces of legislation in the coming parliamentary year, pledging “ambitious” proposals that will build on the “radical” initiatives she has already introduced.

In the next 12 months Ms Sturgeon said her ministers would “intensify our focus on improving the wealth and the wellbeing of communities across Scotland”.

She also said the country had a “real chance to lead the world into the low carbon age”, highlighting the existing commitment to phase out petrol and diesel cars by 2032, eight years earlier than the UK Government’s target date.

But Ms Davidson said with the SNP having been in power for more than a decade, Ms Sturgeon needed to make a “genuine attempt to reset her time in office”.

The First Minister has previously said she could make a decision on a second independence referendum in October, if details about Britain’s departure from the European Union become clear.

However Ms Davidson, writing in the Scottish Mail on Sunday, said Ms Sturgeon should take the opportunity to rule out a referendum.

The Scottish Tory insisted: “Here’s what she should say on Tuesday. First, end the uncertainty. People have had enough of the SNP’s dance of the seven veils over a second referendum.

“She should say at the start of her speech there’s no reason to wait for her promised update in October – an independence referendum is off the table and she will focus for the rest of this parliament on the sole job of governing Scotland.

“People made it clear in last year’s general election they want her to call it off. For once, she should show she is listening and act.”

Ahead of revealing her proposals for the coming year, Ms Sturgeon said the UK’s decision to leave the EU at the end of March 2019 “heightens the importance of everything else we are doing as a Government”.

The First Minister added: “The people of Scotland did not vote to leave the European Union, but in this parliamentary year we are set to be taken out of the EU against our will – with continuing uncertainty around our future relationship with the world’s largest trading block, which is around eight times larger than the UK market alone.

“In the face of this uncertainty, we have to intensify our focus on improving the wealth and the wellbeing of communities across Scotland while continuing to argue the case for a common sense approach to Brexit – for continued membership of the single market and customs union.”