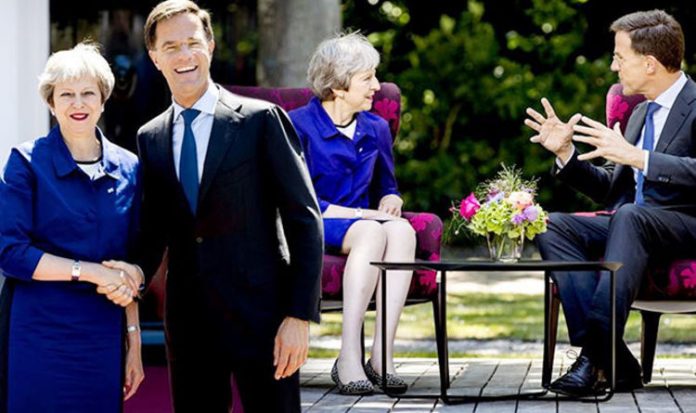 The British Prime Minister travelled to the Netherlands to meet her Dutch counterpart as part of a European Brexit tour, which will include visit to Angela Merkel and Germany.

Over lunch, Mr Rutte pressed Mrs May on a perceived lack of clarity in Britain’s post-Brexit plans ahead of the release of UK’s Government white paper.

He said: “We urgently need clarity about every aspect of the future relationship between the EU and UK.”

Mr Rutte’s comment follow on from a joint agreement of the EU27’s leaders, who expressed a concern about the lack of progress being made in negotiations after a European Council summit debate.

EU diplomats on the fringes of the summit revealed to Express.co.uk a Brexit deal was looking far less likely to be concluded by the October deadline after leaders received a short briefing from Mrs May.

Security has become an important part of Mrs May’s Brexit battle strategy, she warned fellow leaders of the risks of not agreeing a security pact and has done the same with Mr Rutte.

A UK Government spokesman said: “The Prime Minister then made the case for an ambitious economic and security partnership with the European Union.

“She and Prime Minister Rutte discussed the importance of ensuring that trade between the Netherlands and the UK remained as frictionless as possible following the UK’s exit from the EU.”

Westminster were keen to empathises the importance of economic ties between the UK and the Netherlands, using the new London-Amsterdam Eurostar services as an example.

Brexit has been brought to a standstill over both sides lack of common ground on the Irish border question. Both the EU and UK have rejected each others proposals for a backstop mechanism.

European Council President Donald Tusk has warned negotiations will remain halted until a satisfactory solution to prevent a hard border from emerging on Ireland after Brexit.

He told MEPs in Strasbourg: “The 27 leaders shared one concern. While progress has been made in a number of areas, some key aspects still need to be agreed.

“Since there is much work ahead with less and less time, I was very honest in my assessment, including when I spoke to Prime Minister May last week.

“The sooner we get a precise UK proposal on the Irish border, the better the chance to finalise the Brexit negotiations this year.

“Put simply, we cannot make progress unless a solid backstop is presented by the UK and accepted by our Irish friends.

“We are now looking forward to the white paper from the UK and we very much hope it will bring the necessary clarity, realism and impetus to these negotiations.”