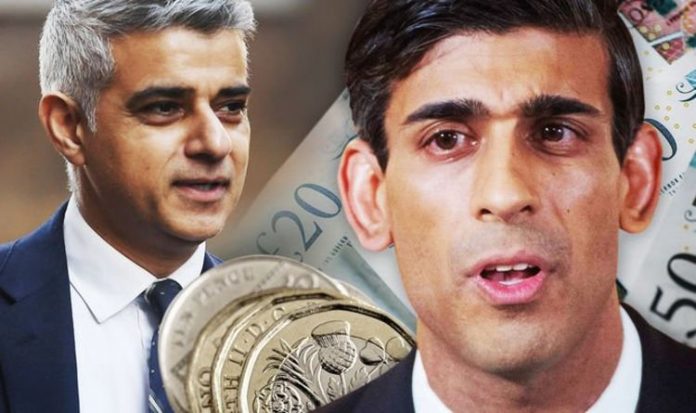 The Mayor of London submitted his request to Chancellor Rishi Sunak yesterday which includes a staggering £20.5billion to build affordable homes and £5.65billion for Transport for London (TfL), He also claimed the capital should be prioritised in the spending review.

Mr Sunak’s spending review will look at capital projects the Government plans to invest in, with much of the funding expected to be concentrated in more deprived areas of the country such as the north and the Midlands.

However, Mr Khan has claimed London will “power the UK’s economic recovery” through the coronavirus pandemic and urged the Government to prioritise the capital in the spending review.

Mr Khan said: “With London accounting for a quarter of the UK’s economic output, the Government’s approach of starving the capital of investment will do nothing more than hamper the UK’s economic recovery from COVID as a whole.

Mr Khan’s plans include a funding settlement for TfL of at least £5.65billion over an 18 month period, with £750million of this planned for Crossrail.

This comes after the transport body was given a bailout of £1.6billion from the Government earlier this year.

During the lockdown period, the network’s revenue fell by more than 90 percent and numbers are still far below normal levels as the country continues to fight against the deadly virus.

Mr Khan is also pushing for future TfL funding for projects such as Crossrail 2 and the Bakerloo line extension.

They also asked for “the creation of a national £1.5billion Clean Air Fund that will enable cities to fairly implement Clean Air Zones and tackle emissions, including through vehicle scrapple and retrofit schemes”.

Back in August, the UK economy shrunk by a record 20.4 percent in just three months, marking the first time in 11 years the country has entered into a recession, according to figures from the Office of National Statistics.

During the coronavirus pandemic, Mr Khan has been widely criticised for attacking the Government for trying to get the economy up and running again.

In one previous statement he said: “I want to be clear as possible with Londoners – social distancing measures are still in place.

“Lockdown hasn’t been lifted and we all still need to play our part in stopping the spread of Covid-19.

“You must still stay at home as much as possible and keep a safe two-metre distance from other people at all times when you are out.”

However, in August, the London Mayor finally admitted if people continue to work from home, it will have a detrimental effect on central London.

He told LBC News: “The key thing I think we need to understand is that if we all stay at home working it’s a big problem for central London.

“Many small businesses rely on your workers going to work, the café bars, the dry cleaners, the shoe repair shops and others.

“When I meet those not just in the culture industry and hospitality, small businesses they are struggling.

“Of course there’s a choice for you to make a big employer. I love London because of its eco-system.

“I don’t want a hollowed-out London. In City Hall we have made sure we have got everything ready, we’ve used July and August to make City Hall safe.”