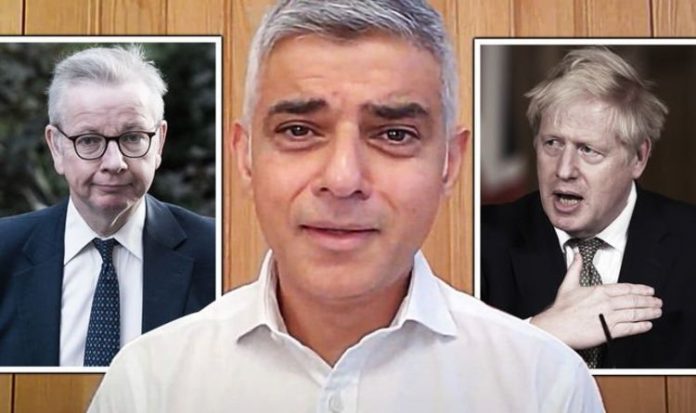 London mayor Sadiq Khan gloated today as he spoke about how himself and scientists pushed for a national lockdown over two weeks ago. While speaking on Sky News, Mr Khan argued Boris Johnson’s Government got it wrong in not implementing a national coronavirus lockdown sooner. Mr Johnson spoke to the nation on Saturday evening and insisted a lockdown would be taking place in England from Thursday for four weeks – something the mayor said should have happened weeks ago.

Mr Khan was frustrated at the Prime Minister’s late action and insisted more still needed to be done.

He also took aim at Mr Gove for defending the Government’s decision to announce a national lockdown now rather than weeks before.

Mr Khan said: “Frankly I am astonished the Government has surpassed themselves in the shambolic they have dealt with this pandemic.

“Two and a half weeks ago a number of us saw the advice from the Government’s own experts, SAGE advisers, and they said the most effective thing to do was to use the half-term period for a very short two-week national lockdown circuit breaker.

“My political opponents criticised me and the Government said no and yet here we are three weeks later with a month’s worth of a second lockdown.”

Mr Khan continued to criticise the Government but added it was important to follow the new lockdown measures regardless.

He said: “My fear is that people will look at this Government and then ignore the advice.

“We may not agree with what the Government is doing, we may not like it but it is really important that when the restrictions come in on Thursday that we all follow the rules.”

“They got it wrong and they should have the humility to say ‘we got it wrong, we apologise, and we now want to get it right.”

Mr Khan also highlighted another crucial area the Government would have to address alongside another lockdown.

He said: “My point is this though, what we need to do is make sure the Government gets test, trace, isolate fully functioning.

“In the absence of a vaccine and without immunity, the only show in town is to have test, trace and isolate working properly.”