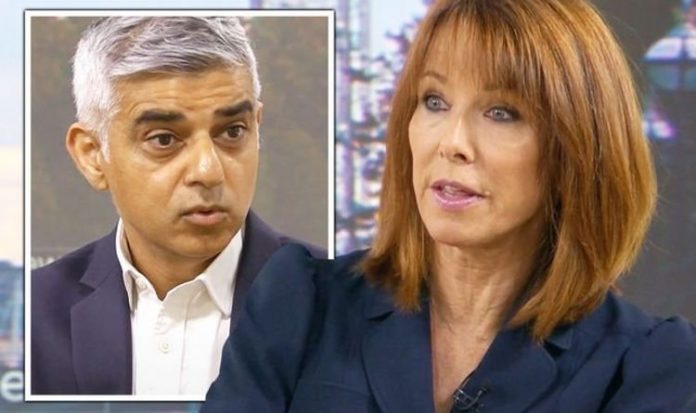 The London Mayor was confronted by Sky News host Kay Burley over his plans to increase cycle lanes and public transport rides in the capital after her viewers complained Mr Khan was making London less attractive to travel to for people in the rest of the UK. The Sky News host said: “So many people tweeting me saying ‘what on earth has he done to our roads?

“‘He’s creating these cycleways everywhere, people are not using them and he’s creating massive traffic jams.

“‘Another reason that people don’t want to come into London’.”

To which Mr Khan replied: “95 percent of our roads in London are controlled by the councils and I’m working closely with the councils to avoid a car usage recovery.

“What I mean by that is we’ve seen in some parts of the world for good reasons people being nervous about using public transport and therefore using their car.

“Even a slight increase in car usage in London will lead to our city coming into a gridlock.

“So what councils are doing, working with the Mayor and the Government is to encourage people to cycle more, to walk more, to use public transport more safely away from rush hour, and to reduce the use of cars if possible.”

But Ms Burley blasted: “Not at the moment, is the argument.

“Because we’re trying to get our city back on its feet.

“So let’s do that first and then look again.”

The London Mayor has come under fire after the London mayor’s new proposed road reforms could spell the end for the iconic London black cabs.

Black cabbies have warned that their job will soon become “extinct” if Mr Khan pushes ahead with his plans.

One London taxi driver Jim Ludlow told talkRADIO that the new cycle and bus lanes could mean the end of the road for the city’s iconic black cabs.

Sadiq Khan has so far introduced 11 miles of new, pop-up cycle lanes in the capital, and a further 12 miles of cycle lanes and wider pavements are already under construction.

Comments accompanying the interview hit out at the mayoral plans, saying: “Khan will destroy the black cab trade.

“Every £20 fare pre-COVID will be double due to extra time spent in his manufactured gridlocks.”

One person said: “It’s a shame but black cabs could become extinct.”

Another added: “I’m very sad to hear this. Khan has been a disaster for London. When will people wake up and get him out?”