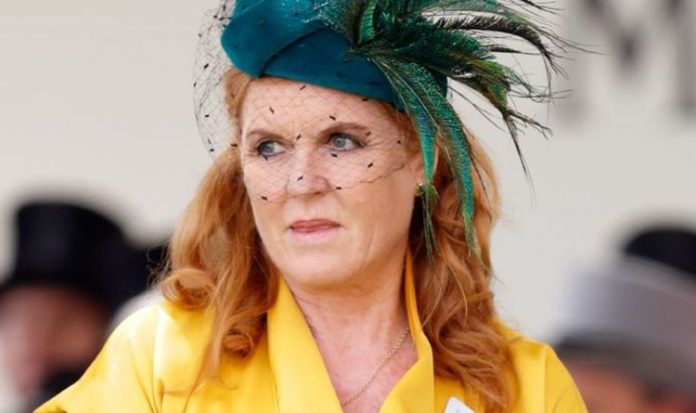 Sarah Ferguson has been told that she likely will not get a royal “endorsement” from the Queen of her new romance book. The Duchess of York has joined with iconic publishers Mills & Boon to write a “steamy” novel based on her ancestor, Lady Margaret Montague Douglas Scott. ITV Royal Rota podcast hosts Chris Ship and Lizzie Robinson pointed out that the row over the release may have been bigger had it been Prince Harry and Meghan, the Duchess of Sussex.

Mr Ship asked: “Harry and Meghan get criticised for doing things that are not upholding the values of the Queen.

“Not that Fergie’s made the commitment in any case, but would you say a Mills & Boon novel upholding the values of the Queen?”

Ms Robinson said: “I suppose she’s not playing on her royal connections to launch this book.

“She’s not a working member of the family.”

She continued: “But you’re right, if Harry and Meghan had done it, it might not have been seen that way.”

Mr Ship added: “A lot of people say that Meghan and Harry should rescind their titles.

“But no one sort of says that Fergie should.

“I just thought it was kind of an interesting point to raise that this isn’t the kind of thing that necessarily the royals would endorse.”

According to the press release, the book will also draw upon Fergie’s own “unique life journey and experiences”.

It will reportedly “draw on many parallel’s from her life”.

‘Her Heart for a Compass’ will be released this August.

Fergie herself talked about her “excitement” in a video.

She posted a clip introducing the novel on her Instagram page.