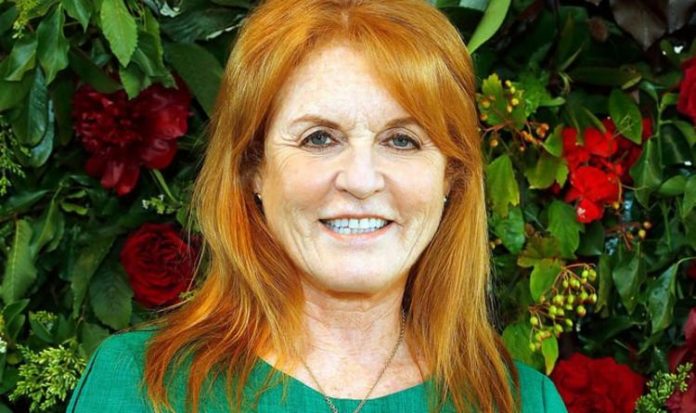 Sarah Ferguson ‘loves seeing herself on The Crown’ says Myers

Sarah, also known as Fergie by family, friends and supporters, surprisingly revealed she is a major fan of the cinematography of the popular Netflix show and has “loved” to see her wedding featured in its fourth season. The Duchess of York said: “I thought it was filmed beautifully.”

Fergie, speaking to Us Weekly, added: “The cinematography was excellent.

“I loved the way they put my wedding in as well.”

The fourth season of The Crown, released in mid-November last year, and was entirely focused on events taking place between 1979 and 1990.

The latest 10 episodes of The Crown in particular depicted the relationship between the Queen and late Prime Minister Margaret Thatcher and the turbulent marriage of Prince Charles and Princess Diana.

Sarah Ferguson news: Fergie was happy to see her wedding being featured in The Crown (Image: GETTY)

However, Sarah, portrayed on screen by Jessica Aquilina, also made a few appearances on screen in the run-up to her royal wedding and, afterwards, when all royals were gathered at Sandringham for Christmas.

Fergie’s revelation was discussed also by ITV’s Lorraine this morning.

Speaking to royal expert Russell Myers, the TV host said: “We always said before ‘do you think any of them actually watch it?’ – well we know that Fergie actually watches it, doesn’t she?”

Mr Myers replied: “We certainly do now. The smart money would definitely have been on Fergie.

“[She’s] no stranger to a bit of self-publicity.

“She has come out and said how wonderful the programme was, obviously it depicts her 1986 marriage to Prince Andrew, and she is saying about the cinematography, which she thought was excellent, and she has enjoyed watching it.

“I mean, all gives us a laugh Fergie, she is always in the papers and we do love see her pop up every now and then.”

Fergie’s admission on The Crown comes after several royal watchers have called on Netflix to issue a health warning ahead of each episode of the show out of fears viewers not familiar with real royal events may believe everything being portrayed in the show is true, causing damage to the monarchy.

This call was backed by Culture Secretary Oliver Dowden who, in November, said the show is “a beautifully produced work of fiction” and so, as with other TV productions, “Netflix should be very clear at the beginning it is just that”.

He added, speaking to the Mail on Sunday: “Without this, I fear a generation of viewers who did not live through these events may mistake fiction for fact.”

The show heavily focuses on the affair between Prince Charles and Camilla, the now-Duchess of Cornwall, and even depicts Princess Diana’s bulimia.

After the latest season aired, several Twitter users who had watched the show took to social media to express their anger against Camilla and Charles.

It also portrays the Queen Mother as a scheming royal and the Queen as a cold and distant figure for her children.

The Princess of Wales’ brother, Earl Spencer, supported the idea of issuing a warning before each episode of The Crown, telling Lorraine: “It would help The Crown an enormous amount if, at the beginning of each episode, it stated that: ‘This isn’t true but it is based around some real events’

“Then everyone would understand it’s drama for drama’s sake.

“I worry people do think that this is gospel and that’s unfair.”

Sarah Ferguson news: Helena Bonham Carter has spoken in favour of a health warning prior to each episode of The Crown (Image: GETTY)

Actress Helena Bonham Carter, who played Princess Margaret in season three and four of The Crown, also spoke in favour of the warning, saying: “I do feel very strongly, because I think we have a moral responsibility to say, ‘Hang on guys, this is not … it’s not a drama-doc, we’re making a drama.’

“So they are two different entities.”

In early December, Netflix announced it would not add a warning to its royal show.

The streaming platform said in a statement: “We have always presented ‘The Crown’ as a drama – and we have every confidence our members understand it’s a work of fiction that’s broadly based on historical events.

“As a result we have no plans – and see no need – to add a disclaimer.”