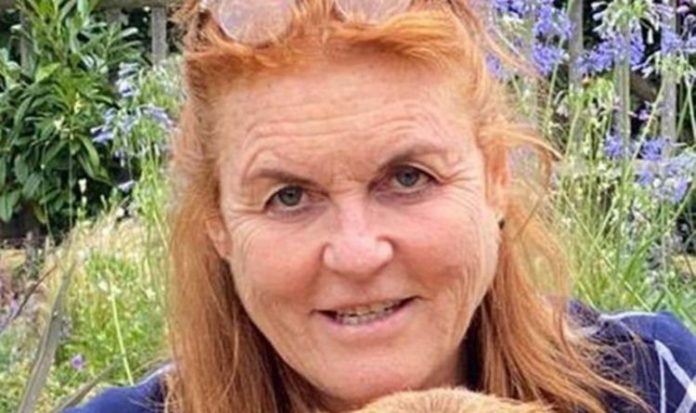 Sarah, also known by friends and family as Fergie, has been photographed proudly holding a sweet dog on her lap. The Duchess of York shared the snap to remind her followers on Twitter of an upcoming video on her Youtube channel, Sarah Ferguson.

She wrote on the social media platform: “Today at 4pm on Storytime with Fergie and Friends I am going to be reading Spot Goes To The Farm by Eric Hill and my guest friend is @Amma_Afra”.

Every day, Prince Andrew’s former wife publishes a video on Youtube in which either she or a guest read a children’s story.

Some days, the Duchess is also filmed teaching her followers how to prepare “fun meals” such as snail snacks and a teddy necklace.

Fergie didn’t reveal who the dog she was pictured with was and whether is a new member of the York family.

But its presence surely stunned a few royal fans.

Twitter user Francine wrote on Twitter referring to the pet: “Wonderful! As well as @Amma_Afra, you seem to have another guest friend there – he looks so sweet, is he joining in too?”

Fergie launched her Youtube channel in April with the aim to keep children entertained during the lockdown.

Fergie hasn’t skipped her daily appointment with children even on July 17, when her eldest daughter Princess Beatrice married in secret at the All Saints Chapel in Windsor, a few minutes away from the Royal Lodge where the Duchess lives with Prince Andrew.

Fergie is said to have organised the wedding in just a couple of week with the help of the bride and Edoardo Mapelli Mozzi’s mother Nikki Williams-Ellis MBE.

The Duchess didn’t appear in the pictures shared by Buckingham Palace after the wedding.

The only members of the Royal Family pictures alongside the groom and bride were the Queen and Prince Philip who, staying at a safe distance from the young couple, beamed at them.

Among the few details known about the wedding, there are the number of guests – only 20, who remained at a strict two-metre distance – and the touching choice made by Beatrice ahead of the nuptials.

While the young York had already picked up a wedding gown, she decided last minute to ask the Queen for the honour to wear one of her vintage dresses.

Beatrice also donned the York tiara chosen by the Queen herself on her own wedding day.

The Duchess, who has already published more than 25 books over the past couple of decades, launched three new children’s books.

To mark the occasion, Sarah was given a cake in the shape of her character from The Enchanted Oak Tree.

These stories have been released as part of a seven-book deal struck in February by Fergie and Australian publishing house Serenity Press.