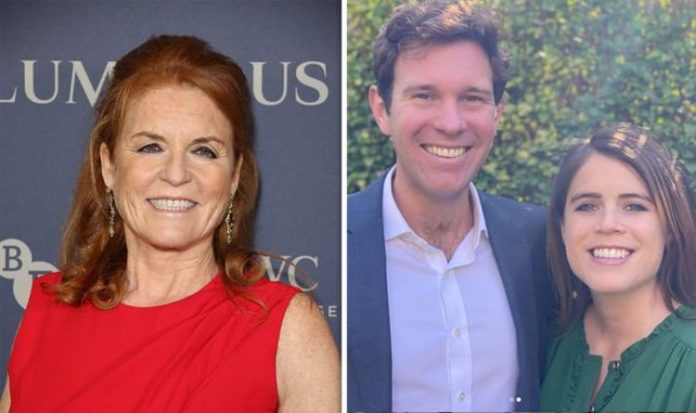 Today, it was announced that Eugenie and her husband Jack Brooksbank are expecting a baby in early 2021. The news comes nearly two years after the couple were married in a huge, lavish ceremony in St George’s Chapel, Windsor Castle in October 2018. Today, her mother Sarah ‒ affectionately known as Fergie ‒ reacted to the news that she is becoming a grandmother with pure joy.

She said: “I am so excited by the news that Eugenie and Jack are expecting their first child.

“Thrilled for them both and in my 60th year – cannot wait to be a grandmother.

However, this is not the first time Fergie has spoken up about her excitement at being a grandmother.

The Duchess of York actually spoke about the prospect last year, when she hinted that her younger daughter and her husband were thinking about having a baby.

She said on The One Show that she could not wait to be a grandmother, saying she felt “excellent” about it, and that Eugenie and Jack are just as excited themselves.

READ  Queen news: Sophie Wessex opens up on how she is following in the monarch's footsteps | Royal | News (Reports)

Fergie also explained why she would be perfect for the role as grandmother.

She said: “They are thrilled because I write children’s books and I’m a child ‒ I haven’t grown up.”

The statement read: “Her Royal Highness Princess Eugenie and Mr Jack Brooksbank are very pleased to announce that they are expecting a baby in early 2021.

READ  Calling on all parts of society to increase climate ambition

This was quickly followed by a post on Eugenie’s Instagram that featured a picture of a tiny pair of boots, as well as a picture of the happy couple.

This has been a happy year for the Yorks, because Princess Beatrice married her beau Edoardo Mapelli Mozzi in July.

After her initial date of May got cancelled due to coronavirus, Beatrice had a small ceremony in Windsor with just 20 people.

The Queen, Prince Philip, Prince Andrew and Fergie were all in attendance.