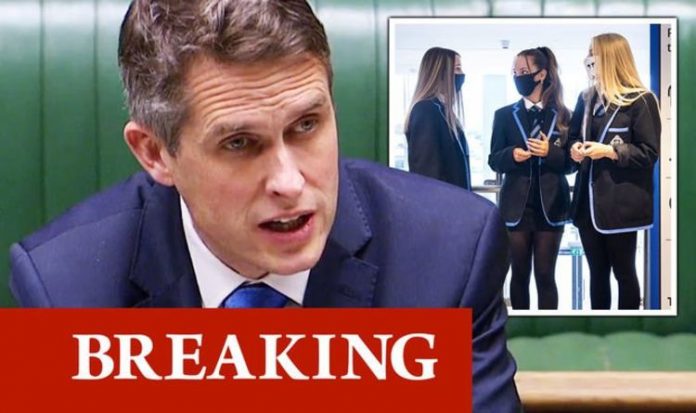 In a huge shift on the planned reopeening, Education Secretary Gavin Williamson told the House of Commons all pupils in exam years will return to secondary schools in England from January 11. The remainder of econdary and college students will go back full-time on January 18. Only vulnerable children and children of key workers will receive face-to-face teaching during the first week of the new school term next month.

The update comes after the Government faced huge pressure to delay the return of pupils after the Christmas break in a bid to stem soaring coronavirus infections.

Mr Williamson began by telling MPs in the Commons the government must make an “immediate adjustment” to its plans to reopen all schools in January.

In a statement, he said: “We must always act swiftly when circumstances change. The evidence about the new Covid variant and rising infection rates have required some immediate adjustment to our plans for the new term.”

The Education Secretary added: “The latest study we have from Public Health England is that Covid infections among children are triggered by changes in the community rate. The study also says that the wider impact of school closures on children’s development would be significant.

“I’m quite clear that we must continue to do all we can to keep children in school.”

Mr Williamson told the Commons it was a “last resort” that some schools needed to close in areas of England where coronavirus infection rates are at their highest.

He added: “We’ll be opening the majority of primary schools as planned on Monday, January 4. We know how vitally important it is for younger children to be in school for their education, wellbeing and wider development.

“In a small number of areas where the infection rates are highest we will implement our existing contingency framework such as only vulnerable children and children of critical workers will attend face to face.

“We will publish this list of areas today on the GOV.UK website. I’d like to emphasise that this is being used only as a last resort. This is not all Tier 4 areas and that the overwhelming majority of primary schools will open as planned on Monday.”