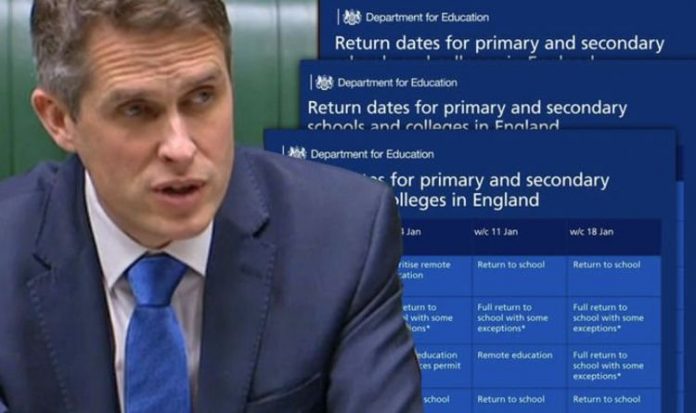 Education Secretary Gavin Williamson confirmed a staggered return to the classroom will be implemented for both primary and secondary school children in January. On Wednesday, Mr Williamson said 85 percent on primary school children will return to their studies on January 4 – with pupils living in some of the highest COVID-19 areas, such as parts of London, Essex and Kent, not going back until January 18.

Secondary school children taking exams in the summer will return on January 11 with other year groups starting a week later.

The somewhat complex advice based on what year a student is in and where they live has prompted the Department for Education (DfE) to release a chart to try and clarify the situation.

However, in a post on social media, Labour MP Wes Streeting highlighted at least three different graphics outlining the advice has emerged.

Writing on Twitter, he said: “Hi @GavinWilliamson. DfE have put out THREE different versions of this chart for parents, staff and school leaders to understand the plan for schools in January. Which one applies?

“I hope you appreciate stress Government incompetence has added this year.

In one chart it identifies a year group as “secondary/college exams years” in another they are identified as “exam years (year 11 and 13)”.

In another example, for the week beginning January 11, it shows secondary/college students should conduct “remote education” but in another chart it says they should “prioritise remote education”.

A spokeswomen for the DfE has told Express.co.uk the chart has been “amended” today in order to provide “clarification”.

Parents and students are also advised to refer to the latest chart on the Department for Education website.

Mr Williamson said he is “absolutely confident” there will be no further delays to school re-openings.

It comes as 44 million people, or 78 percent of the population of England, are now in Tier 4, where non-essential shops, as well as gyms, cinemas, casinos and hairdressers, have to stay shut.

This evening, the Department for Health announced a record rise in coronavirus infections, with 55,892 positive tests recorded the past 24 hours.

A further 964 people died within 28 days of a positive test – slightly down from 981 on Wednesday.