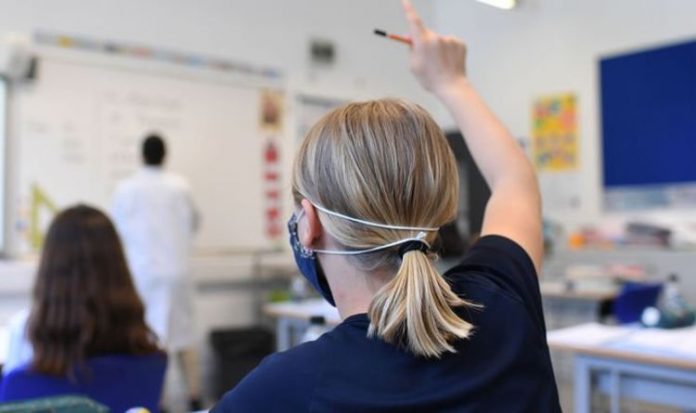 Schools are currently closed for all children except those whose parents are essential workers. Boris Johnson hopes reopening can begin from March 8 if the coronavirus situation allows.

The Government has confirmed more than 15 billion Britons have now been vaccinated for coronavirus, one day ahead of target.

However there are concerns teachers unions may object following the emergence of a 49-minute long video from the National Education Union (NEU) discussing industrial action.

The footage, uncovered by the Daily Mail, was recorded by NEU campaign manager Henry Fowler.

In the video Venda Premkumar, joint secretary of the NEU’s Redbridge branch in London, claimed teachers had manage to “push back” the reopening of schools last summer.

She claimed: “About 80 percent of our schools didn’t open on June 1 as the Government intended.”

The union official added when one academy did attempt to reopen employees “initiated strike action but never had to carry the threat out because they won in the end”.

Similarly Ms Premkumar revealed the NEU threatened strike action when teachers were asked to host online lessons from classrooms rather than their own homes.

She claimed: “Even though we didn’t have to carry the threat out, of the members who responded to the survey 92 per cent said yes to strike action.”

However some Tory backbenchers are demanding schools return towards the end of February in England as well.

Speaking to Sky News Robert Halfon, who chairs the House of Commons education committee, warned against an “epidemic of educational poverty”.

He argued: “I understand why the government are worried and want to ensure people are kept safe.

“Or even one or two years of primary schools?

Fears school opening could be compromised by industrial action caused anger from pressure group the Campaign for Real Education.

Speaking to the Daily Mail Chris McGovern, an ex-headteacher, said: “The union bosses are holding children to ransom.

The Government is hoping to vaccinate all over-50s and the clinically vulnerable by the end of April.