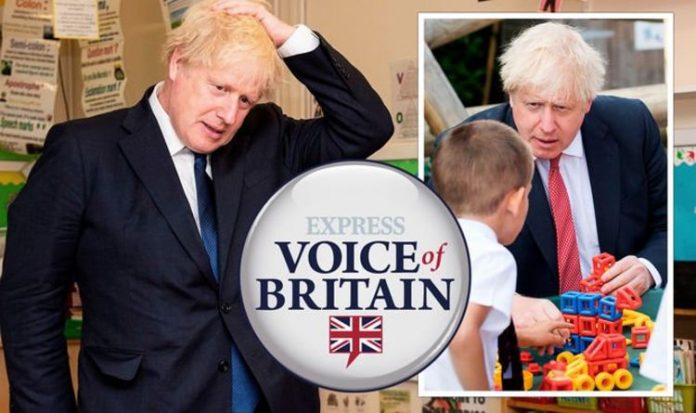 Express.co.uk readers voted in our poll on whether they think it is safe for children to return to the classroom. Some 60 percent said no, while 39 percent replied yes and one percent did not know.

Commenting on the poll, one reader said: “No it is not safe.”

Another wrote: “I don’t believe it’s safe, and I think the government need to make improvements to the current plans for school re-openings.”

But a third commented: “They might be safe, but what about us adults? It’s scary.”

And another added: “If it is safe for them to play on packed beaches, roam around shops with crowds around them and go on holidays and play out with their mates, then school is the least of their problem where safety measures have been put in place.

“Nowhere is 100 percent safe in any sphere of life!”

Our poll comes after the Prime Minister insisted it is “vital” that children return to school next month.

“So let’s make sure that all kids, all pupils, get back to school at the beginning of September.”

Speaking on Monday, Education Secretary Gavin Williamson said it is the right time for children to go back to school and warned there is more harm done to them by not being there.

He said: “We’ve been incredibly clear in terms of the guidance that we’ve given as to how schools can work and operate in a safe and proper way.

“We’ve seen secondary schools welcoming back years 10 and years 12 at the end of last year, and many, many students coming back and benefiting from being back in education.

“That’s why it’s the right time for children to come back.”

Schools standards minister Nick Gibb said if parents had concerns they should raise them with head teachers.

But he stressed that attendance was not optional for children.

Mr Gibb told BBC Radio 4’s Today programme: “We live in a country where education is compulsory and I think parents can be reassured that the measures that schools are taking to make sure that we minimise the risk of the transmission of the virus are very effective.”

Local authorities can fine parents £120 – cut to £60 if paid within 21 days – over a child’s absence from school, with the threat of prosecution if they fail to pay.

Schools closed in March for the majority of children when the UK when into lockdown.

The Government has said if there are local lockdowns schools will be the last thing to shut.