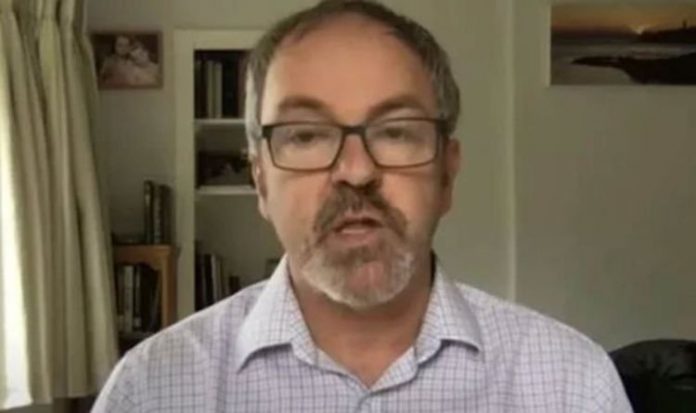 Harsh restrictions are based on widely varying figures not thorough study of the evidence, Professor Carl Heneghan said, adding: “We are nine months in and no one understands what is really going on.” Professor Heneghan, of the Centre for Evidence Based Medicine at Oxford University, said lockdown must not be “the only show in town” and a middle road should be found. His colleague Dr Tom Jefferson said that models were being relied upon as irrefutable evidence that lockdowns were the answer.

But the data includes infection numbers being drawn from a range of different studies, with estimates ranging from about 30,000 a day up to 100,000.

Dr Jefferson said the “worst case scenario” was always being presented and mathematical modelling failed to account for the harm from lockdowns.

He said. “We need a debate about lockdowns. It needs to be debated by the public and within Parliament.”

Prof Heneghan’s research has led to a review into how deaths are counted after he spotted an anomaly that inflated the figures.

He said lockdowns should not be a default response that “leads to harm and damage and we need to account for this too”.

He added: “For example, there are thousands of excess deaths in the home that are not caused by Covid.”

He said science should always be kept independent of policy.

Questioning the influence of the Government’s advisers he said: “When would a non-governmental, non-elected group have so much influence?

“There seems to be a mixing of science with opinions on policymaking decisions. As scientists, our job is to interpret the evidence.

“There are normal boundaries of producing evidence and sharing this evidence with policymakers that are being crossed. I would be improving the quality of the data to better understand what is happening.”

The different ways of recording data such as infection numbers was leading to confusion, he said.

Professor Heneghan has called for science to remain independent of policy (Image: Getty)

Dr Jefferson suggested that the “worst-case scenario” was often presented to scare the public into compliance.

Prof Heneghan said: “There is a significant discrepancy depending where you look.

“For example, the Office for National Statistics says there are 50,000 infections a day but the [Imperial College London] React study says that the figure is 100,000.

“Nine months in and no one understands what is going on – we have four different methods of measuring the infection rate and four different results.”

He also said the Government needed to be open about whether its objective was to control the virus or to eliminate it.

He asked: “Why lockdown? What happened to flattening the curve? “One or two areas have high numbers, as in the North-west, but it is very different in the South-west.

“To get the R [number] below one you need to use very draconian measures and that policy is effectively trying to eliminate the virus. The policy of suppression needs to be debated properly and we need to discuss a middle road. Learning to live with this virus, protecting vulnerable people and mitigating risk for those most at risk while we go about our daily lives.

“Anyone who looks for a simple solution is likely to be wrong.

“According to the ONS the R number is between 1.1 and 1.3 which suggests we are going in the right direction.

“If anyone thinks lockdown is a good idea they need to look at Paris on Thursday night with everyone leaving and the roads jammed up.

“What does that achieve? “The question is, then, what do you expect when opening up?”

Dr Jefferson called for more explanation of the figures.

He said: “I would not be terrifying people with worst-case scenarios, and if I did put out figures showing this I would make it very clear.”

Dr Jefferson found from PCR test results – a standard for recording infection – said “false positives” are often generated by viral fragments in people without active Covid. Some tests may even fail to distinguish between viruses.

This adds to the recorded cases, he said, but added: “The only cases of public concern are the serious cases which are more likely to go to hospital and which are infectious.

“A positive case record – spitting out dead pieces of virus – is of no importance. I only want to know who is contagious with 97 per cent certainty
and serious disease.”

Professor Hugh Pennington, of the University of Aberdeen, said: “Lockdown measures are not hitting the problem at its core. If we close down we may interrupt the virus but we will kill off the economy.”