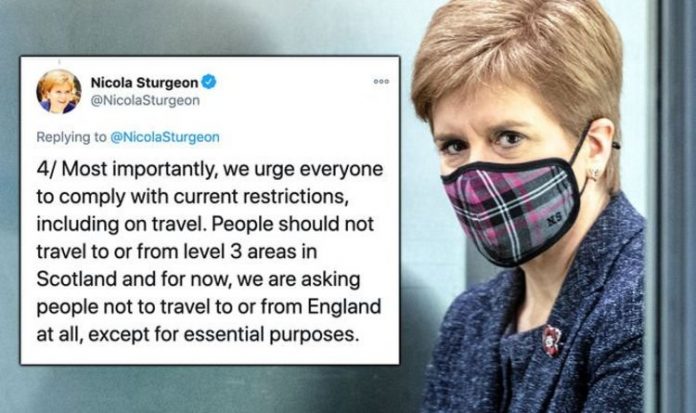 The Scottish First Minister yesterday told Scots to reconsider traveling into England, tweeting: “We urge everyone to comply with current restrictions, including on travel. People should not travel to or from level 3 areas in Scotland and for now, we are asking people not to travel to or from England at all, except for essential purposes.” As Boris Johnson implements a second lockdown for England, Ms Sturgeon has announced Scotland will not implement similar restrictions.

A five-tiered system of restrictions is to come into force in Scotland on Monday.

Ms Sturgeon tweeted: “Prevalence of the virus is currently lower than in other parts of the UK and there are early signs that the tough restrictions in place since we moved quickly in late September have started to slow the rate of the increase”.

In England, the second lockdown is expected to last until December 2 and all non-essential businesses must remain shut, although schools will stay open.

Speaking to the BBC’s Good Morning Scotland, Professor Bauld said: “You can see from the figures in Scotland that the case numbers are levelling off.

“We are making progress.

“The question I would ask is the progress quick enough?”

“We need to continue to expect these infection rates to go up and I think that the government strategy in Scotland is to keep an eye on the situation over the next week or two.

“My feeling would be unless we see improvements, particularly in some parts of the central belt, we really, realistically, could be looking at level 4, which we want to avoid but would be necessary, essentially just to avoid these preventable deaths escalating even further.”