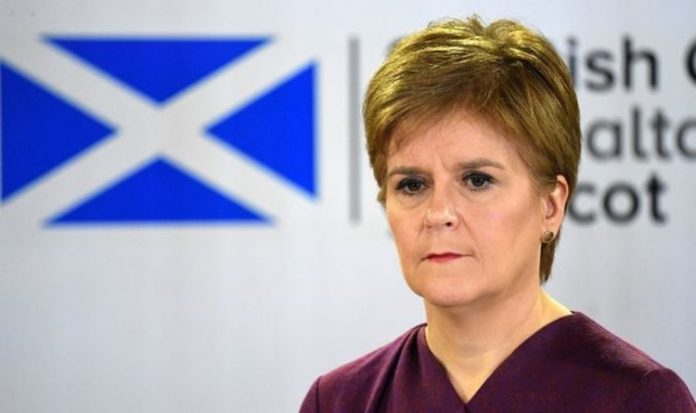 First Minister Nicola Sturgeon is expected to announce that some parts of Scotland will enter the toughest restrictions on Tuesday afternoon. The First Minister said on Monday infection rates have not subsided as much as necessary to prevent a crisis this winter. Concerns have been raised after “stubbornly high” rates of infection were reported in Glasgow and many surrounding areas.

Until now, no part of Scotland has been placed in level four since the new tier system came into effect.

Speaking at the daily coronavirus briefing, Ms Sturgeon said: “Moving to Level 4 restrictions for a limited period in some areas – while not a decision that we will ever take lightly because of the wider economic and social impacts – would help us to address both of these concerns.

“We can’t do it at all if we have stubbornly high prevalence, because any spike over Christmas would potentially tip our hospital services into a much more serious position.”

A final decision on the matter will be made at Tuesday’s cabinet meeting before the First Minister confirms any changes in a statement to MSPs at Holyrood.

Ms Sturgeon said she aims to keep schools fully open in the worst-affected areas due to fears over the potential “damage” caused to children by taking them out of the classroom.

The First Minister is also likely to announce a legal travel ban to reinforce the regional alert system.

Closure of retail and hospitality industries in Glasgow and west-central Scotland will undoubtedly have a knock-on effect in neighbouring areas without an enforceable ban on movement.

Speaking at Monday’s briefing the First Minister added: “Clearly, if you go to level 4, then the necessity of travel restrictions, which are necessary to support any regional tiered approach, become even more necessary.

“So, yes, a part of our consideration today is whether we need to, in order to make very clear to people how important it is that they abide by these travel restrictions, whether any level 4 move would be accompanied by a more statutory regulation based approach to travel restrictions.”

Business leaders have warned moving to tier 4 would put retailers on the brink just before the Christmas period.

A spokesperson from the Scottish Retail Consortium said: “The scientific evidence is clear shuttering shops will do little to reduce the spread of Covid – but we can be explicit closing stores in the crucial Christmas period could be devastating for those businesses.

“If shops, which all the evidence shows are safe, cannot trade throughout this period then losing that revenue might prevent the business reopening, with direct consequences for jobs.”