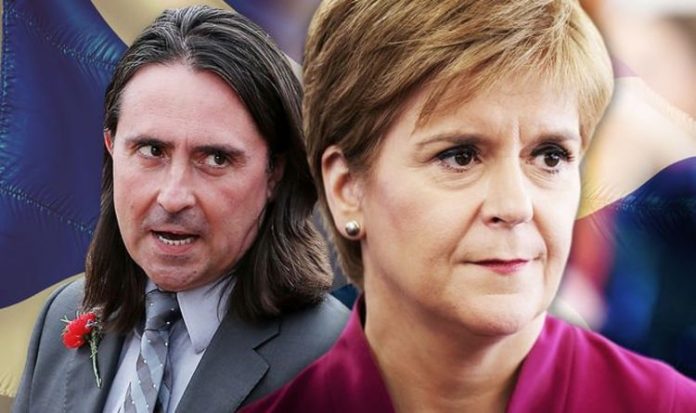 Mr Oliver, a BBC regular who has presented numerous documentaries including A History of Scotland, Vikings, and Coast, issued his stark warning during the course of a passionate essay stating the case for the UK remaining in tact. The article was uploaded to the pro-union website These Islands in the midst of the SNP’s annual conference, staged online this year as a result of coronavirus restrictions – and he pulled no punches, highlighting SNP leader Nicola Sturgeon’s insistence that the 2014 referendum has been a “once in a generation” decision, a pledge she has since jettisoned. The Renfrew-born Glasgow University graduate said: “This Britain of ours has been and remains a bright light in a dark and darkening world, a magnet for humanity moving in hopes of somewhere better.

“When the EU was conjured into being it copied our union in hopes of having a fraction of its success.

“Whatever the intention, those builders fell short of the mark.

“There is no EU welfare state, and German taxes do not pay for healthcare in Greece or pensions in Spain.

“Most of the wider world would rather it were more like us, that it might have what we have had.

“When it comes to western liberal democracy, ours is the original marque.”

Mr Oliver, a fierce opponent of independence six years ago, said his view had not changed since then.

READ MORE: ‘How much will it COST Ian?’ Blackford attacked after Scotland boast

All Parliamentarians were temporary tenants, just as the British Isles were “rented accommodation” which will eventually be handed down to future generations, he stressed.

He added: “You don’t burn down the house just because you don’t care for those living in it now. Keep the house together.

“If there are repairs to be done, then so be it.

“Let’s not break it into flats like a dodgy conversion job by cowboy builders.”

His article concluded: “I don’t base my decision on politics or economics or even history.

“I make my choices based on the responsibility I feel for people – alive now and yet to be born.

“I love Britain more than anywhere else in the world.

“With all my heart I declare that those of us born here, or who have made a home here by choice, are the luckiest, most blessed of all people.

“I am British. I will always be British.”