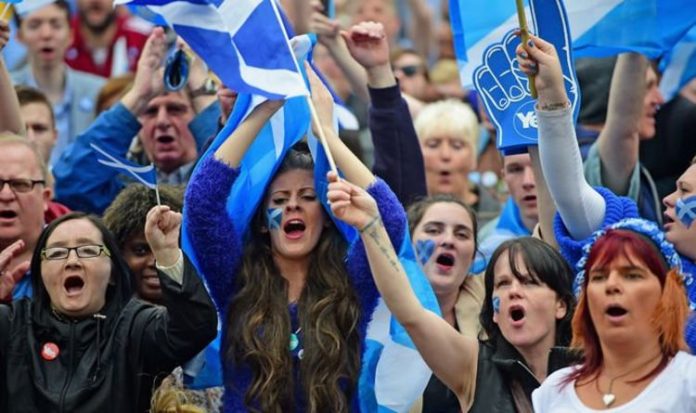 Pictures have emerged of 12 independence supporters holding Scotland and ‘Yes’ flags at the side of the Tay Road Bridge, which carries the A92 road across the Firth of Tay from Newport-on-Tay in Fife to Dundee in Scotland. Alistair Ballantyne posted the images on the Facebook Independence Group Dundee & Angus saying: “Great turnout at Tayport Bridges&Flags for Indy today.”

But critics hit back, accusing them of posing a “danger to motorists” on the road.

Writing for his pro-Union party ‘Alliance for Unity’ on Twitter, George Galloway said: “I’ve been in politics for 50 years.

“Never did it occur to me that standing by the side of a (dangerous) road waving flags at passing motorists ‘works’”.

Others launched an attack on the independence campaigners, with one saying: “Clearly these people have absolutely no self awareness, just like the FM!!”

Another said: “What a bunch of abject idiots causing danger to motorists where are the police?”

A Twitter user said: “There were more people at the bus stop on my way home from work tonight than this s*** show.”

Another added: ”’Yes’ flags, in answer to a question put to them six years ago, which has already been answered.

“The Scottish people said NO! NAW!!”

“Lots of work to do, fellow Yes supporters, to persuade even more people – but the momentum is very clearly with us.”

Overall, 51 percent of those questioned said they support independence, 42 percent said they would vote to stay in the UK and 7 percent of voters were undecided.

When undecided voters were excluded, 55 percent favoured Scotland leaving the UK, with 45 percent preferring to stay in the Union.

Pro-independence organisation Business for Scotland commissioned the poll for Panelbase, with chief executive Gordon MacIntyre-Kemp hailing the results as a “huge landmark” showing the “writing is very definitely on the wall for the Union”.

He said: “The reversal of the 2014 result is a huge landmark – 55 percent Yes will send shockwaves throughout the political world.

“There is no conclusion to draw from this new set of data other than the writing is very definitely on the wall for the Union.

“The referendum that will be demanded following May 2021 Holyrood elections, on these figures, would start with Yes to independence commanding a 10 percent lead.

“Independence is now significantly the majority decision of the people of Scotland and its momentum looks solid.”