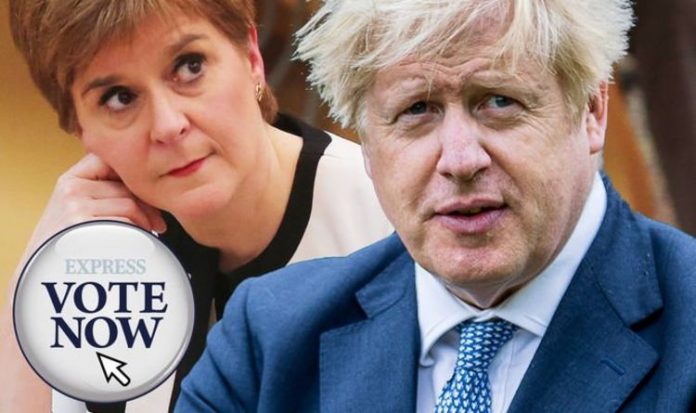 The Prime Minister has so far refused to cave to Ms Sturgeon’s desperate demands for a referendum on Scottish independence, telling her the previous 2014 vote must be respected and pledging to “never give up on our incredible Union”. But determined to plough ahead with her plot, Ms Sturgeon on Tuesday announced a new draft Bill paving the way for a possible second Scottish independence referendum, saying it will be published before next May’s Holyrood elections.

Express.co.uk is asking you how should Boris Johnson react to Ms Sturgeon’s demands? Should the prime minister give her a referendum, grant Scotland more powers, or simply ignore her?

The SNP leader revealed draft legislation, setting out the proposed terms and timing for a second independence vote, as well as the question that could be asked, will be produced by the Scottish Government.

The announcement came as part of her programme for government statement, much of which was dominated by the response to the coronavirus pandemic.

Ms Sturgeon vowed to “publish a draft Bill, setting out the proposed terms and timing of an independence referendum, as well as the proposed question that people will be asked in that referendum” before the end of this current Holyrood term.

With Scottish Parliament elections taking place in May, she added: “At next year’s election, we will make the case for Scotland to become an independent country, and seek a clear endorsement of Scotland’s right to choose our own future.”

The First Minister insisted Brexit “and the way in which it is being implemented” by the UK Government “immeasurably strengthens the case for Scotland becoming an independent country”.

He has previously said it would be “such a shame” to lose the “magic” of the UK, insisting that the UK is “better together”.

He said: ”The union of the United Kingdom, for me it’s the greatest political partnership the world has ever seen.

“And I think what people in this country often don’t appreciate is the way in which the UK is seen abroad.

“They don’t see us as England or Wales or Scotland or Northern Ireland, what they see is great British institutions.

“It would be such a shame to lose the power, the magic of that union.

“We are much, much stronger and better together than broken up.”