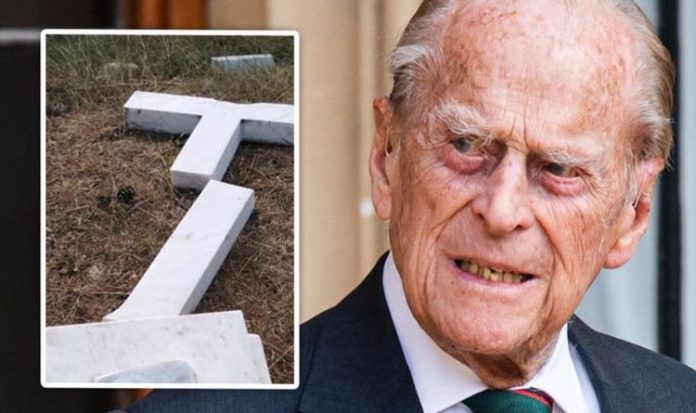 The grave of King Constantine’s parents, King Paul and Queen Frederica of Hanover was found severely damaged by police officers on their routine afternoon patrol at the Tatoi estate. The marble cross standing above the royal couple’s tombs was torn down and broken into three pieces.

The Greek Department of Culture and Sports, responsible for looking after this grave, was immediately informed of this act of vandalism and is

planning to begin the restoration of the tombs as quickly as possible.

In a statement, it said: “Today, during the afternoon patrol by the police at the Tatoi estate, vandalism was found at the burial monument of King Paul and Queen Frederica.

“The relevant service of the Ministry of Culture was immediately informed.

“The restoration of the monument is planned immediately.”

Local police have also launched an investigation into this incident in a bid to find the vandals.

King Paul’s reign lasted from 1947 to his death in 1964, when he was succeeded by his son Constantine II.

He was the first cousin of the Duke of Edinburgh, born in Greece in 1921.

title of Prince of Greece and Denmark at birth, Prince Philip only lived in the country for a few months before his family was exiled after King Constantine I was forced to abdicate in 1922.

Nevertheless, Prince Philip remembered his ties with the Mediterranean monarchy and invited King Paul to his nuptials with the Queen, then-Princess Elizabeth, in November 1947.

However, the Greek monarch was too ill to travel across Europe at the time and was represented at Westminster Abbey by his wife Queen Frederica.

Paul’s wife herself had links with the British Royal Family.

The late Queen, born Her Royal Highness Princess Frederica of Hanover, was a descendant of Queen Victoria.

Following the death of King Paul, Frederica became the Queen Mother to King Constantine II, who reigned over Greece until the country abolished the monarchy in 1973.

Queen Frederica died in February 1981 and was laid to rest next to her husband at the Tatoi estate, the summer palace of the former Greek Royal Family.

News of the desecrated grave of King Paul and Queen Frederica came just a few hours after the Greek Royal Family announced the engagement of Prince Philippos and Nina Flohr.

The couple got engaged during the summer on the island of Ithaca, as revealed in a statement issued by the royal household.

It read: “Their Majesties King Constantine and Queen Anne-Marie are delighted to announce the engagement of their youngest son HRH Prince Philippos to Nina Nastassja Flohr, daughter of Thomas Flohr and Katharina Flohr.

“Nina and Philippos were engaged on the island of Ithaca in Greece earlier this summer.

“The details of their wedding will be announced in due course.”

After their engagement was made official, Ms Flohr shared a heartfelt message dedicated to the prince on Instagram.

She wrote: “My dearest Philippos. I love you today, I will love you tomorrow and forever.

“You make us happier, better and stronger. I cannot wait to spend the rest our lives together”.