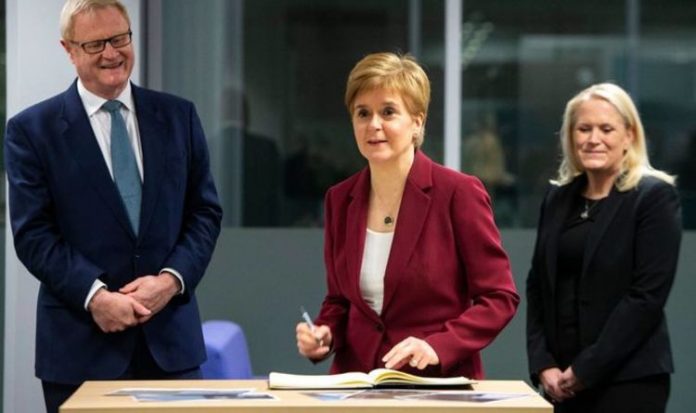 Scottish columnist Jamie Blackett warned Scotland’s economy would suffer severely as questions surrounding its independent currency have not been addressed properly. Mr Blackett spoke with George Galloway on his Russia Today show and explained Nicola Sturgeon had two options that had a multitude of problems attached to them. The SNP leader could keep the Pound but lose all control over it or adopt a brand new currency which would be extremely weak.

Speaking to George Galloway on the Mother of All Talkshows on RT, Mr Blackett said: “The Fed, or the European Central Bank, underwrites all British currencies and the currency that we all share in all four constituent parts of the United Kingdom.

“And it sets one interest rates across the whole United Kingdom, if God forbid (Scottish independence) happened, we (Scotland) would have to either use the Pound Sterling in the same way as somewhere like Panama uses.”

Host Galloway said Panama uses the US Dollar and has no control over the currency.

Mr Blackett continued: “It certainly doesn’t control it and you can’t really have a successful economy without your own currency or they would have to go to a different currency.

“Let’s call them ‘Sturgeons’ for the sake of argument and that currency would probably be weaker.

“In 1707, there were 12 Scottish pounds to one English pound and I’m not suggesting that it would quite get to that sort of exchange rate but it might do.

“Certainly, I think, a Scottish currency would be weaker and that really matters and it particularly matters to anybody who has a mortgage.

“Because your mortgage, if you have one, will be in Sterling and then if (Scottish Independence) happens and Scotland became an independent country separated from the rest of the United Kingdom – we would be paid in ‘Sturgeons’.

Nicola Sturgeon is currently embroiled in an inquiry into Alex Salmond’s harassment claims, which he was cleared of, and the mishandling of his investigation.

Political insiders say the dispute has torn apart the SNP who are picking sides in the row.