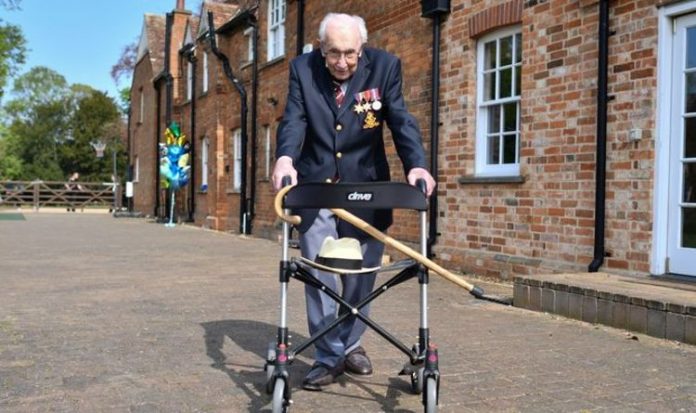 The 100-year-old army veteran’s charity walk in April – in which he walked up and down his garden 100 times before his birthday – raised an incredible £33 million for the NHS. Now, the centenarian has said he was hospitalised less than a year before he took the challenge upon himself.

In ITV’s broadcast ‘The Life and Times of Captain Sir Tom’, he recalled how an injury put him in hospital ahead of his charity walk.

He said: “I was in the kitchen doing no harm to anybody. I was unloading the dishwasher and then I got tangled up in my own feet and I fell down and hit my head against the dishwasher.

“I fractured this hip and that was really where the trouble started.”

Captain Sir Tom revealed that, as a result of the injury, he was in hospital for “quite some time.”

The documentary revealed that, as a result of the injury and hospitalisation, Captain Sir Tom’s family were fearful of the outcome.

One of his daughters, Hannah Ingram-Moore, said: “Did I think he would survive it? In all honesty, no, I don’t think we did.”

However, Captain Sir Tom said he “came out alright”, and soldiered on through his recovery by buying a treadmill.

Even now, the World War II veteran told how the injury still means he cannot “walk about easily.”

Captain Sir Tom said he was “absolutely overawed” by the occasion.

He said: “This is such a high award and to get it from Her Majesty as well – what more can anyone wish for? This has been an absolutely magnificent day for me.”

Captain Sir Tom is originally from Keighley in West Yorkshire.

However, he completed his charity walk at his home in Marston Moretaine, Bedfordshire.

He had originally only planned to raise £1,000 for the NHS – this was exceeded by an enormous margin.

The Life and Times of Captain Sir Tom was broadcast on ITV last night.

Other events recalled in the show include how he travelled to Nepal alone in his 90s.