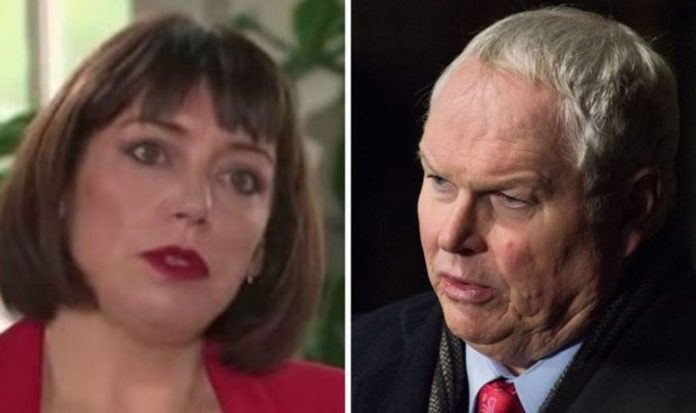 Ms Rigby, and three other Sky News journalists including Kay Burley, has been taken off air while an investigation into her conduct is carried out after she went to a party that breached Covid-19 rules. The broadcaster’s political editor, who became a favourite among some viewers for her no-nonsense questioning during Government coronavirus briefings, joined Ms Burley to celebrate her 60th birthday. Both now face an uncertain future with Sky News, and its editor-at-large Mr Boulton retweeted messages that said the pair were “morons”.

A producer on the show said many were expecting the pair would face “serious punishment”, while Mr Boulton argued their breach had harmed the reputation of Sky News.

It is not the first time Ms Rigby has attracted criticism, after she was accused of bias while writing a piece for Sky Views.

Ms Rigby, in her article, allegedly aired her own views in the online article, when she discussed how a Brexit deadlock would be broken in Parliament last year.

She wrote: “Parliament can, and should, take back control.

“MPs should now be preparing to finish what they have started and dispose of [Prime Minister Boris] Johnson should he refuse to sanction a Brexit extension.”

TV news is different to online and print media, as it must adhere to strict impartiality rules.

If breaches of guidelines appear to have been made, they are investigated by Ofcom.

Ms Rigby was accused of stepping into the realm of comment when pointing out exactly what MPs could do next to ensure Brexit negotiations could continue.

Mr Boulton and Ms Burley were both embroiled in similar allegations after Ofcom investigated 2,800 complaints about Sky News’ general election coverage in 2010.

The then-Sky News political editor drew around 1,800 complaints, with 670 of them regarding his controversial interview with former Downing Street spin doctor Alastair Campbell.

The regulator dismissed the claims, adding: “Two well-known personalities from the worlds of politics and journalism were taking part in a debate about a matter of topical and serious concern.

“We considered that although the tone and content of this exchange was unusual, it would not have been beyond the likely expectations of the audience for this channel.”

Ms Burley, Ms Rigby, Inzamam Rashid and presenter Sam Washington are currently all off-air as an investigation into their conduct continues.

Ms Burley said on Monday: “I want to apologise to you all for an error of judgement.

“On Saturday night I was enjoying my 60th birthday at a Covid compliant restaurant. I am embarrassed to say that later in the evening I inadvertently broke the rules.”

Despite Ms Burley’s apology, Mr Boulton maintained that Sky News had worked hard during the pandemic to advise and educate the public on the restrictions of Covid-19.

He added: “Sky has taken a very clear line about public safety, and obviously something like this perhaps underlines [the importance of] that.”

It is unclear when a decision over Ms Rigby and the other broadcasters will be made.