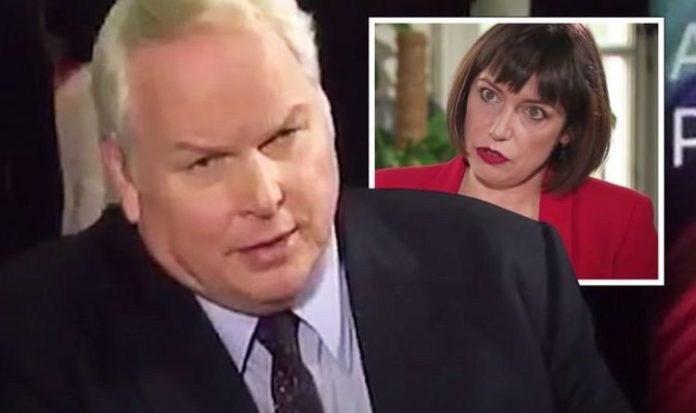 Mr Boulton retweeted comments suggesting Sky News’ Ms Rigby was a “moron” after she breached Covid-19 guidelines by attending fellow journalist Kay Burley’s 60th birthday party last weekend. The broadcaster’s editor-at-large attacked both Ms Rigby and Ms Burley, saying they had tarnished the reputation of Sky News, as it raised questions over the station’s “credibility of journalism”. In an extraordinary attack, Mr Boulton then claimed the actions of his colleagues had undermined Sky, while a decision over their futures remains ongoing.

But in another withering tirade, Mr Boulton once lashed out at Ms Burley and other Sky News staff while he was waiting to broadcast from the Conservative Party Conference.

In footage captured two years ago, Mr Boulton shouted to a colleague: “Yeah, if…if… if Beth comes, put her in there and then she can go away.”

But becoming even more irate, Mr Boulton then proceeded to demand someone “just put the f*****g seat in”, as he pointed to a space next to him.

Sky News meltdown: Adam Boulton told Beth Rigby ‘to sit if she wants to be on f*****g TV’ (Image: GETTY/YOUTUBE)

He then threw his hands in the air and shouted: “Yeah, well, she’s got to come and f*****g sit here if she wants to be on telly.”

Ms Rigby can then be heard in the background saying “I’m not f*****g around, I was told not to come on and then to come on”, as the row deepened.

Following the footage’s emergence, Mr Boulton apologised to Ms Rigby, as well as other colleagues, adding in a statement from Sky News he “acknowledged he should not have sworn”.

It is not the first time Mr Boulton has come under scrutiny for his hard-line approach, which often spills over when he is interviewing politicians.

For example, in 2010, Mr Boulton and former director of communications for Prime Minister Tony Blair, Alastair Campbell, were embroiled in a bitter dispute on air, after the Sky News host was accused of bias towards the Conservatives.

After the allegation was directed at him by Mr Campbell, Mr Boulton shouted: “Don’t tell me what I think.”

Tensions were high at the time as Labour’s Gordon Brown and the Conservatives’ David Cameron were both attempting to strike a deal with Liberal Democrat leader Nick Clegg to form a coalition Government.

In a similar exchange, Mr Boulton was criticised following an interview with Labour MP Ben Bradshaw on the same day.

Beth Rigby has also been taken off air as a result of the breach (Image: GETTY)

Mr Boulton is highly acclaimed for his journalism and has collected a string of awards during his career, including winning the Royal Television Society’s supreme Judge’s Award.

His latest intervention, however, is unprecedented as he became the first major Sky News player to comment on the actions of Mr Rigby and Ms Burley.

Speaking to the Guardian, he said Sky “has worked very hard” during the coronavirus pandemic to ensure the public follow the relevant guidelines and restrictions.

He added: “Sky has taken a very clear line about public safety, and obviously something like this perhaps underlines [the importance of] that.”

Mr Boulton’s concerns were shared by others inside Sky News, including one producer who described the situation as “excruciating”.

They said it will “only get worse the longer it goes on”, and that there were concerns it could end with “serious punishment”.

Mr Boulton concluded: “Whatever happens next is not my decision and obviously it’s not up to me to criticise colleagues.”

Ms Burley, Ms Rigby, Inzamam Rashid and presenter Sam Washington are currently all off air as an investigation into their conduct continues.

Ms Burley said on Monday: “I want to apologise to you all for an error of judgement.

“On Saturday night I was enjoying my 60th birthday at a Covid compliant restaurant. I am embarrassed to say that later in the evening I inadvertently broke the rules.”