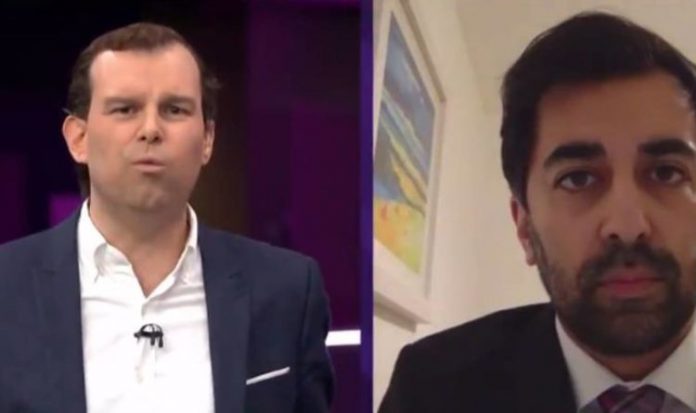 Humza Yousaf defended the SNP against calls led by the Scottish Conservatives that Nicola Sturgeon should resign. The SNP Justice Minister explained it was “naked opportunism” from the Tories who have threatened to table a motion of no confidence in the First Minister. Nicola Sturgeon is accused of breaking the ministerial code by lying to Scottish Parliament over the date which she first learnt about Alex Salmond’s sexual harassment claims as Mr Yousaf fought back against the Scottish Tories.

Speaking on BBC’s The Nine, host James Cook said: “My question is, no one has taken responsibility, it’s such a mess you’ve got to concede it’s awful.

“Your lawyers thought it was awful, it’s a shambles.

“It wasted more than half a million pounds, doesn’t your government have a problem with taking responsibility?

“And isn’t it time, as the opposition parties suggest, and particularly the conservatives, that the buck stops at the top and the First Minister should resign?”

It was revealed earlier this week that lawyers had advised the Scottish Government there was a real chance of losing its court case against Alex Salmond.

Mr Yousaf replied: “Well, that is naked opportunism from the Scottish Tories.

“They haven’t heard of course the First Minister’s evidence and they’ve decided that she’s misled Parliament.

“They haven’t waited for the independent investigation into the ministerial code and decided already that she has breached it.

Alex Salmond was subject to a Scottish Government investigation in 2017 which looked into allegations of sexual harassments.

Mr Salmond was acquitted, but launched legal action against the Government’s investigation and won a judicial review.

An inquiry into the Government’s handling of the case is now underway.