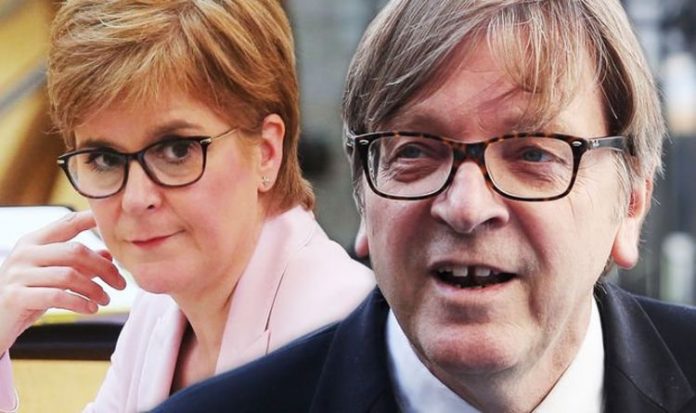 Polling expert Sir John Curtice claims an independence referendum will be “difficult to avoid” in the next two or three years if the SNP win an outright majority at the next Holyrood election. Speaking to BBC Newsnight, the politics professor from the University of Strathclyde claimed that if such a result does occur, “precedent” around both the 2014 independence referendum and the 2016 EU referendum would make it difficult for the UK Government to block. He added that the timing of the referendum was also out of the hands of politicians and said it would only happen in a “post-pandemic world”.

Professor Curtice said: “At the moment one has to say that the SNP are well ahead in the opinion polls for next May, they certainly have a better than 50 percent chance of being able to get an overall majority.

“If that does happen I think it will be difficult to avoid another referendum within shall we say a two or three year time period.”

He said the use of the “once in a generation” referendum argument may not hold the weight opposition parties and unionists hope, with Prof Curtice stating that arguments which provided the government with mandates for the EU referendum and the original independence referendum would be contradicted if the SNP win.

As the future of the union looks more uncertain than ever, unearthed reports suggest the EU might help First Minister Nicola Sturgeon achieve her independence bid.

Despite reports claiming it would be extremely difficult for an independent Scotland to rejoin the EU – as new members can only be allowed into the bloc through a unanimous vote from the existing member states – the most recent claims by prominent eurocrat Guy Verhofstadt suggest otherwise.

In February 2017, the former European Parliament’s Brexit coordinator told The National that Europe was aware that a clear majority of Scots had voted to remain within the European Union in the 2016 EU referendum.

“We need the Scottish people and their firm European beliefs.

While Brexit might have made the case for Scottish independence stronger, though, it has also made it practically more difficult.

An independent Scotland would now border a non-EU country, likely requiring infrastructure and border checks between regions whose communities are deeply intertwined – similar to the problem of the Irish border that severely complicated Brexit talks.

Scotland could also be rejected by Brussels due to its current deficit of seven percent of GDP, unless it adopted a strict austerity programme from the EU as well as potentially adopting the euro.