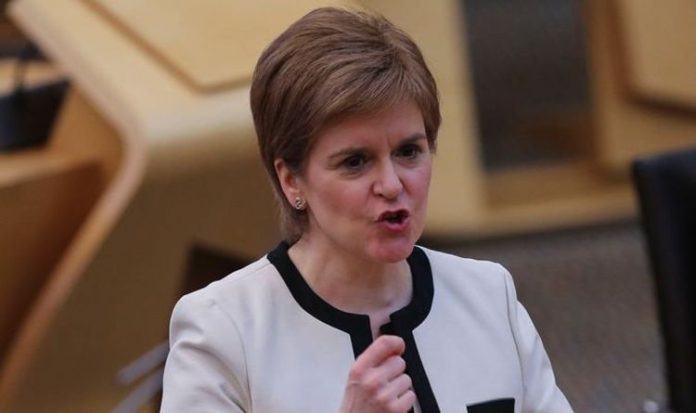 The SNP is battling a series of controversies, Mandy Rhodes said, with Ms Sturgeon responsible for the situation. Ms Rhodes, a leading writer and commentator, mocked Ms Sturgeon and said: “They say that a fish rots from the head down. And something is beginning to reek.”

She wrote in the Scottish Sun: “With growing calls for public inquiries into, among others, the Rangers debacle, the care homes scandal, drug deaths and the Salmond complaints process, with internal battles hitting the headlines, flawed policy proposals hitting the buffers and so-called political allies all but hitting each other, this feels more like a failing party leading a fag-end government limping along to its final demise than the one that in actuality is riding so high and on the road to victory.

“With every day comes another twist and turn in the SNP psychodrama: internal battles about the route to independence, what is meant by Gender Recognition Act reform, the whiff of corruption and the murky suspicions that hang over a parliamentary inquiry that the party leadership has somehow managed to engineer as a rerun of the Salmond trial instead of being about them.

“There’s a growing unease about how this nation is being run.”

She concluded: “They say that a fish rots from the head down. And something is beginning to reek.

“The question will be whether by May 6, the electorate is simply prepared to just hold its nose.”

Mr Tomkins argued the Scottish parliament is now “so broken that it doesn’t even know when it is being misled anymore”.

As a result, Boris Johnson has suggested there shouldn’t be another independence referendum until 2054.

Leading SNP politicians have suggested Scotland could hold a second referendum even if the British Government objects.

This would be similar to the Catalan poll which took place in 2017 and was branded “illegal” by the Spanish government.

Many of those who organised that vote subsequently faced legal action and several were imprisoned.

Speaking to the BBC Ms Sturgeon said Mr Johnson is “frightened of democracy” over his opposition to a second referendum.